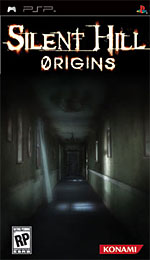 Silent Hill Origins is the newest game in the survival horror series and it ships for the PSP on November 13th this year.

Silent Hill is one of the premier horror franchises in gaming, yet the series had yet to break out of the console home market . . . until now. Silent Hill Origins is a prequel to the original Silent Hill that was released for the PS1 in 1999. The game takes horror to new levels with a better combat system, lots of puzzles, a new creepy location, new characters and a twisting storyline that ties into the previous games . . . and now you will finally get to be immersed in the hellish world of Silent Hill on the go!

Check the game out yourself in an extremely creepy new trailer and several new gameplay videos from E3 2007.Click on the bottom-right corner arrow to view it full-screen.
Haunted Hospital Gameplay/Item Collecting/Fighting
Creepy doll puzzle and Game Over Screen
Take a look at the improved battle system and a creepy little girl scene!
For more information on the game and it’s storyline watch this interview with the developers.Watch this in HD.