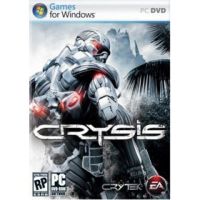 Crysis, an upcoming sci-fi first-person shooter for the PC that is scheduled for release in September this year, is a game that’s been turning heads since it was first announced in January of ’06, and subsequently shown at all of last year’s big shows, including E3. But even though I’ve seen the game so much, you can never get enough of it!

It still manages to impress me at how great the graphics are. They are arguably the best in any game, period. And the gameplay also looks very fun.

Crysis is coming from the guys who brought you Far Cry and it has some really unique first-person shooter mechanics, including superhuman strength (that allows you to jump really high), superhuman defense and superhuman speed.

Check out the newest Crysis gameplay videos from E3 2007.Click on the bottom-right corner arrow to view it full-screen.

This trailer will also show you all the awesome weapons from Crysis! Time to have some fun!