Home » News » The Witcher for PC shown in new E3 2007 CG trailer. RPG features unique combat system based on how you click

The Witcher for PC shown in new E3 2007 CG trailer. RPG features unique combat system based on how you click 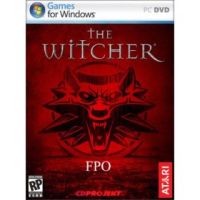 The Witcher is an upcoming fantasy RPG for the PC that has a release date of October this year! The game will appeal to anyone looking for a complex, in-depth RPG that features fast-paced combat instead of the usual slower pace seen in most RPGs. And on top of that the CG in this game looks AMAZING. Unfortuneatly, new footage of the gameplay hasn’t been released, but we can go back and check out older footage from E3 2006 in addition to the new CG trailer.

The Witcher throws players into a unique world rife with political intrigue, in which the lines between good and evil are blurred. Based on the world created by best-selling Polish author Andrzej Sapkowski’s novels, The Witcher casts players as Geralt, a legendary monster slayer and master swordfighter with supernatural abilities and reflexes.

Using advanced graphics and physics systems, The Witcher delivers brutal action, multi-faceted RPG options and an intriguing story. The combat is unique because depending on where and how you click the mouse, your character will do different moves.