Home » News » PlayStation 3 starter pack announced for Europe and Australia with 60GB, 2 controllers and 2 games, instead of a price drop

PlayStation 3 starter pack announced for Europe and Australia with 60GB, 2 controllers and 2 games, instead of a price drop 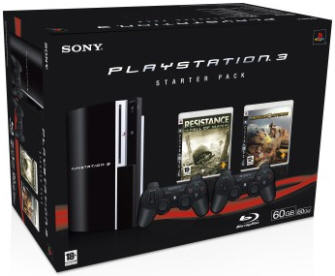 Sony Computer Entertainment Europe has confirmed the launch of a new PlayStation 3 starter pack, which will retail at â‚¬599 / Â£425 (or AUD$999 in Australia) for the console (the original price of the 60GB model), but with extras that include two first party games and two wireless Sixaxis controllers. It will be available in the UK from July 18 and elsewhere across Europe by August 1.

The choice of first party games available in the Starter Pack will vary to suit the interests in each country, but will include Resistance Fall of Man and MotorStorm.

â€œWith sell through of over 1.2 million [PS3] units in the SCEE territories to date, PlayStation 3 has proved to be an instant and huge successâ€, said David Reeves, President of Sony Computer Entertainment Europe.

â€œThe exceptional value of the new Starter Pack will bring the excitement of PlayStation gaming to a much wider audience. Add to this a stellar lineup of software titles for the second half of the year and we are confident that this amazing value Starter Pack will encourage many more keen gamers to join the PlayStation 3 communityâ€.

To give this some context in the UK, the first party software has a price of Â£39.99 and Sixaxis controllers Â£34.99. Which equates to â€œadded valueâ€ of Â£115 over the original PS3 hardware launch price Â£425. If youâ€™re in the UK, the choice of software title will be between Resistance: Fall of Man, MotorStorm, Formula One: Championship Edition, Genji Days of Blade and Ridge Racer 7. — Tempting you with mostly the best rated games, nice!