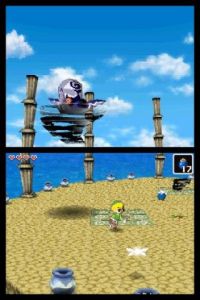 At Nintendo’s E3 2007 Press Conference they showed off The Legend of Zelda: Phantom Hourglass for the Nintendo DS, which is one of Nintendo’s most anticipated upcoming titles. They gave a long stage demo where they played through one of the dungeon levels.

Phantom Hourglass is entirely touch-screen controlled, and while this may seem crazy once you see the game in motion and watch how fluid it all controls, you WILL be a believer! I’m also digging the new weapons and how the touch-screen really revolutionizes the way you would play.

The game looks sweet and due to it’s top-down nature and cell-shaded (er, toon-shaded) style, it looks like a cross between A Link to the Past and The Wind Waker! In fact, Bill Trinen said that in his opinion Phantom Hourglass is the best Zelda yet! It’s coming to the US on October 1st and as recently reported will include multiplayer!

Check the game out in this stage demonstration.