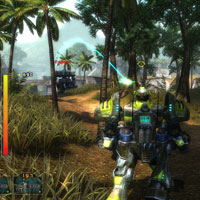 Ubisoft has announced that they will be bringing developer Third Wave’s mech shooter War World to Xbox Live arcade this summer. Pricing and an exact release date hasn’t been announced yet, but we will probably learn more soon. The game is a third-person shooter and it will include a full 100 level single-player campaign in addition to multiplayer over Xbox Live.

Ubisoft describes War World as “a fast-paced third-person shooter that combines a unique blend of heart-pumping action and tactical gameplay,” and notes that it will mark the introduction of “an entirely new genre to Xbox Live Arcade.

First released in 2006 and currently available for PC, War World lets players take control of one of ten different uniquely-equipped Mechanoids to battle either against CPU controlled bots or in Xbox Live multiplayer skirmishes.

Apart from the single player campaign, the title will ship with four different multiplayer game modes for up to eight players, including Capture the Flag, Bomb Assault, Death Match, and Team Death Match. — via Gamasutra