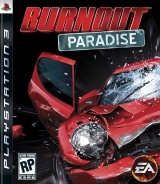 In Burnout Paradise (the fifth in the series) you’re given the keys to the city, but it’s up to you to earn the keys to the meanest and most dangerous cars on the street, and earn your Burnout license. Watch the cars tear it up and crash in the video below.

A preview of the Xbox 360 and PS3 racers explains that “Unlike most videogames that have lobbies and other middle-man programs to prepare you for the race to come, Burnout Paradise makes everything seamless. Simply locate a traffic light and friend via in-game buddy list, invite him to race, and when he accepts… BOOM! You’re online immediately and ready to go. Keep in mind, this entire process happens without any interruptions or menu screens whatsoever. It’s easily the most convenient multiplayer feature we’ve seen and will likely be the standard from its release point forward (and yes, IGN saw it demoed in real time on the PS3. Supposedly, it’ll work the same on 360 as well).”

See the Burnout Paradise E3 2007 gameplay video:Click on the bottom-right corner arrow to view it full-screen.