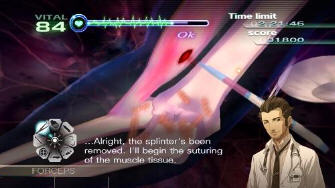 Starting holiday season 2007 in America, be prepared to keep your hands steady and your mind focused â€“ this time around thereâ€™s a lot more on the line. Every cut of the scalpel, every pinch of the forceps, each and every second that ticks by is of the absolute greatest importance. If you think it’s too much to handle alone, invite a friend to assist with the operation and work together to save patients from flat-lining. The adrenaline is pumping, lives are at stake, and only you can save the day. Have you got what it takes?

About Trauma Center: New Blood:
At a remote hospital in Alaska, Dr. Markus Vaughn quietly toils, a surgeon who has forsaken the politics and power struggles of his former ward. He is content to use the power he has discovered within himself, the Healing Touch, to positively affect the lives of those in need. His partner is Valerie Blaylock, a promising young doctor eager to
unlock her own dormant abilities. When the facility unexpectedly closes, they are forced to return to Concordia Medical Institute, where politics are more important than patientâ€™s lives, and doctors more concerned with image than their ministration. There they are
recruited into the government organization Caduceus, where they will learn of a conspiracy with dire ramifications, and their lives will be changed forever!

Key features are:
* Two Player Cooperative Play! For the first time in the series, work with a friend to race against the clock and save livesâ€¦ success will require teamwork and communication â€“ Every second counts!
* All-New Story, Characters, and Operations! Depend on a brand new medical team for support and advice as you tackle new emergencies.
* Fully Voiced Dialogue! Characters will come to life as never before as they speak to you during operations and story cutscenes.
* Full 480p and 16×9 Widescreen Support!
* Online Score Ranking System!

Releasing in holiday season 2007 in America, the new game boasts a longer, overarching storyline, more characters and locations to visit, and various game design enhancements, Touch Detective 2Â½ delivers in every way a sequel should. Fans of the original Touch Detective, fear not: the same humor and quirkiness that made the first adventure so memorable is back in full force for the sequel!

About Touch Detective 2 Â½:
Accepted into the Great Detective Society, Mackenzie has become a fully-accredited sleuth! Trouble is, people still do not take her seriously. All that changes when a string of strange thefts pulls her into a puzzling plot, and sheâ€™ll have to use all of her skills and intuition to discover the motive behind the crimes and solve the mystery!

Key features are:
* A hilariously off-beat story spanning 5 Episodes! Longer, wittier, and more entertaining than the first Touch Detective, the new plot develops over the course of 5 interrelated chapters, each playing off the one before.
* Over twice the locations to visit and all-new characters to compliment the returning cast from the original!
Cromwell, Penelope, and even your trusty sidekick Funghi all make a return in Touch Detective 2Â½, and if you want to get to the bottom of the mystery, you will need their help!
* More unlockables! Solve side quests and complete an all-new Touch List and Investigation Report to gain access to new music and art!

Set for release in Fall/winter 2007 in America, Ontamarama makes full use of the Nintendo DS dual screens, touch functionality, and microphone, Ontamarama will provide an entertaining level of challenge for novice players, while offering satisfyingly challenging play modes for advanced gamers. Fast reflexes and a keen sense of rhythm are the keys to success in this frantic, fun, and addictive music-based game!

About Ontamarama:
On a peaceful tropical island, Ontama roam free. These gentle sound spirits, when properly conducted, offer the people of the land a beautiful and enchanting symphony. Wishing to rob the inhabitants of this joy, an evil demon begins to control the natives into capturing the Ontama. Two aspiring â€œOntamaestrosâ€, Beat and Rest, discover the
plot and decide to foil the evil demonâ€™s scheme by challenging the villagers under the demonâ€™s control in order to release the trapped Ontama!

Key features are:
* Fast-paced music-based gameplay that challenges the playerâ€™s reflexes, timing, and concentration.
* 12 stages to play, including a tutorial, each with their own catchy melody to master! Each successful
challenge nets the player â€œOntama Pointsâ€, which can be used to unlock new songs, items, and Ontama
styles!
* Story mode with three difficulty settings that tailor the game to gamers of varying skill levels.
* Freeplay and Challenge modes offer excellent replayability, allowing favorite stages to be revisited and offering greater levels of difficulty for skilled Ontamaestros! The more you play, the more you can unlock!

Set for release in Fall/winter 2007 in America, Draglade not just about how hard you hit or fast you move, it’s also how well you can groove. An innovative mix of music and fighting means you will have to use your rhythm as well as your reflexes if you want to overcome your foes and show everyone that youâ€™re a Draglade master!

About Draglade:
In the world of Draglade, Grapping has become the world’s premier spectator sport. Scientists will discover how to turn atmospheric Matter into energy. Soon thereafter, a means of harnessing this energy â€“ G-Cons â€“ will allow for the conversion of this power into a weapon called a â€œGladeâ€. When a Glade hits something, the Glade emits a sound. Fighters and entertainers quickly realized the potential of Grapping, as the music generated by the clashing

Glades in combat provided an experience that couldn’t be matched in any other sport. In this world overcome by Grapping fever, four young indie Grappers â€“ Hibito, Guy, Kyle, and Daichi â€“ will strive to reach the ranks of the Major Grappers.

Key features are:
* A creative mix of fighting and music! Intuitive controls allow players of all ages and skills to get into thegame, while a vast assortment of customizable fighting techniques and devastating combinations allow for advanced fighting tactics. Use Beat Combos to create a powerful melody!
* Unlockable Extras! Discover additional characters and special techniques – there are plenty of things to collect! Each character will have their own unique weapons and attributes.
* Customizable characters! Mix and match moves to tailor your fighter to your preferences, and expand your arsenal of abilities by trading skills with a friend!
* Local and Nintendo WFC multiplayer! Play against players across the nation in a one-on-one test of skills, or connect locally with a friend and take on cooperative quests!

Thanks for showing the detailed info to Neogaf.