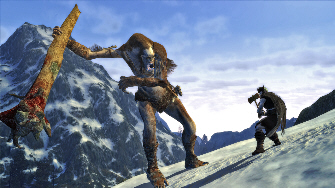 Age of Conan: Hyborian Adventures is one of two new Conan games that are currently in development. One of them is a straight up Ninja Gaiden-style action game (called simply “Conan the Barbarian”). The other one, Age of Conan, is an upcoming MMORPG for Xbox 360 & PC by the makers of Anarchy Online featuring the brutal warrior barbarian that’s scheduled for release in the U.S. on October 30th 2007.

We’ve covered Age of Conan before, and now, thanks to the new E3 2007 show, we have a brand new trailer for the game that features some stunningly brutal CG. And while computer generated graphics often aren’t representative of the actual gameplay, lets hope that this type of combat and style seen in this trailer is what the developers are shooting for.

Nonetheless, the trailer is impressive, and reminds me of the movie 300. View the stunning new Age of Conan: Hyborian Adventures CG trailer below!

And check out in-game footage of the game in another trailer below: