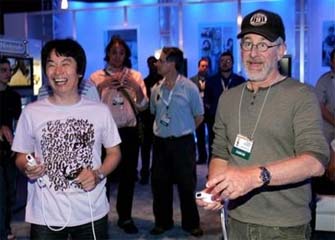 In fall 2005, Electronic Arts said it had entered into a deal to create three original games in together with noted film director Steven Spielberg and the director was looking for ideas…

As you can see from the picture above, at E3 2006 Nintendo’s game designer Shigeru Miyamoto showed off Wii Sports Tennis to film director Steven Spielberg, who said about the event: “Afterwards, we were talking about the Wii and I said, ‘Wouldn’t it be fun if we could dot-dot-dot?'” That idea turned out to be an action-puzzle simulatorâ€”code-named PQRSâ€”that neatly blends the creativity of the building-blocks game Jenga with the charm of a Saturday-morning cartoon. It runs on top of a physics program that lets you manipulate blocks with the Wii remote as if it were an extension of your hand. Or, as Spielberg explains for all the non-geeks out there, “It just seemed like a great thing for the entire family to play together over Christmas. Although you don’t need the excuse of a holiday to enjoy it.”

In an interview with Newsweek he also commented about the second game, code-named LMNO and made for Xbox 360 and PS3, can be described as “North by Northwest” meets “E.T.” â€”if E.T. were female, grown up and, um, hot. You don’t play as the girl, however. You’re an ex-secret agent, and the bond that you forge while on the run with the computer-controlled womanâ€”good, bad, indifferentâ€”determines the nature of her special abilities and the ways in which she’ll assist you.

Says Spielberg: “The challenge is, can the game have an emotional impact on players while they are actively manipulating the world?” Based on the clever ways in which he and EA are extracting a genuine performance from their digital Eveâ€”complete with eyes that widen, lips that curl and translucent skin that lights up in different colors to express her quicksilver moodsâ€”we think Spielberg’s got yet another hit on his hands. This sounds like an action and simulator game in one, so both games seem to be sims, I wonder how that’ll work.