Sega announces it’s planned E3 line-up, a total of 9 games across all platforms 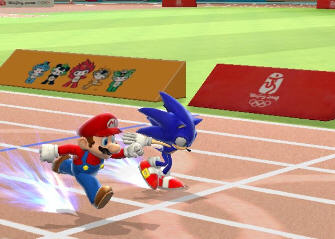 Sega has announced the line-up of games it’s planning on showing off at the new E3 2007 Show (E3 Media & Business Summit) that starts tomorow. While all these games have been announced before, some of them are still relatively unknown with hardly any details being released, so it’ll be good to see more of these games at the show where we can learn more about them.

Mario & Sonic at the Olympic Games (Wii, DS): The two rival mascots team up for their first game ever, just in time for the 2008 Beijing Olympics. The two mascot characters and their friends compete in track and field, archery, gymnastics, and more.
Ghost Squad (Wii): A port of Sega’s arcade light-gun shooter comes to the Wii.
NiGHTS: Journey of Dreams (Wii): Sega’s Saturn mascot gets it’s long-overdue revival as the jester stars in a brand-new Wii game using the unique Wii motion-sensing controls.
Sonic Rush Adventure (DS): Sonic returns to the DS in classic platforming 2D form.
The Golden Compass (XB360, Wii, PS3, PS2, PSP, DS, PC): Sega’s version of the book-to-film-to-game, based on the upcoming movie, which is set to follow the first book in Phillip Pullman’s His Dark Materials trilogy.
The Club (XB360, PS3, PC): A modern-day gladiatorial-style shooter.
Universe at War (PC, XB360): Upcoming RTS game that allows online play between both PC and Xbox 360 players.
Virtua Fighter 5 (XB360): The newest installment in Sega’s fighting game franchise features online-play for the new Xbox 360 version.
Space Siege (PC): The follow-up to Dungeon Siege, and an upcoming PC action-RPG featuring cybernetic upgrades and an evolving story based on your choices.