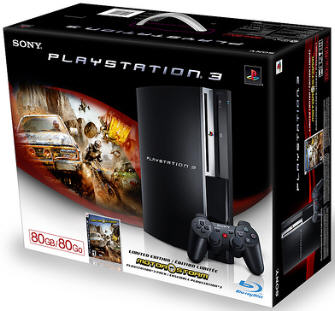 By featuring an expanded hard disk drive (HDD), the new 80GB PS3 is designed to appeal to the online gaming and entertainment enthusiast, providing ample storage space to download more games and other entertainment content from the PlayStation Network. There are currently more than 60 playable games and game-related downloads available through PlayStation Store, with expanded entertainment content coming soon. The new model features the million-selling game MotorStorm in the box, allowing up to 12 players to play online at one time, hitting the dirt in this visually-arresting, fast-paced racing title.

Update: The new 80GB PS3 model has everything that the 60GB model has EXCEPT backwards compatibility hardware. Instead the new model will use software emulation to play older Playstation & Playstation 2 titles, just like the Xbox 360. This means you can count on tons of games not working, with Sony adding more to the list. So this is definitely something to think about if you’re considering buying the 80GB SKU.

Thanks to Alan and Joe who sent this in.

The real question is, how about a price drop for the rest of the world Sony?