This week at E3 2007 we’ll see a lot of new games getting announced. Three of them from Sierra Online have been shown off early to get some pre-E3 exposure, which is pretty smart since we’ll be knee-deep in new games in the next few days. After the success of their previous games Carcassonne and Assault Heroes, these three new games: Battlestar Galactica, Switchball, and Commanders: Attack!, are all for the Xbox 360 download service Xbox Live Arcade. 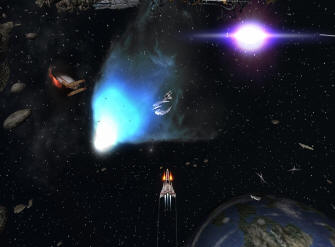 Inspired by the hit television series, Battlestar Galactica, airing on the SCI FI Channel, Battlestar Galactica is an action-packed top-down space combat game set in the universe of the hugely popular sci-fi television show. Players can take part in enormous multiplayer space battles with up to eight players online or play through the single-player campaign that includes memorable missions from the TV series. Pilots can either sign up to defend the Galactica or play as the ruthless Cylons as they seek to remove the human race from existence. With full 3D graphics to show off the detailed ships and cosmic environments, Battlestar Galactica allows players to fly four Human and four Cylon ships from the Viper II to the Cylon raider, each with unique weapon capabilities. Battlestar Galactica will be available on Xbox LIVE Arcade.

* Single-Player Campaign: Pilot various ships and complete memorable missions from the TV series.
* Multiplayer Game Mode: Play online with 8 players in this relentless space-based action shooter in Firefight, Skirmish and Domination modes.
* Legendary Spaceships: Fly 4 Human and 4 Cylon ships from the Viper II to the Cylon Raider, each with unique weapon capabilities.
* Special Weapons: Coordinate attacks with a gallery of destructive weapons including the missiles, guns and more.
* Realistic Effects: Full 3D graphics to show off the detailed ships and cosmic environment.
* Defensive Maneuvers: Avoid annihilation with the barrel roll, quick turnabouts and other aerial moves. 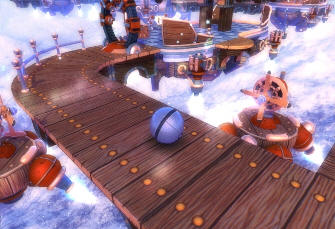 Switchball is coming to Xbox LIVE Arcade late this summer, the game challenges players to control an ever-changing ball along a narrow and challenging course suspended in midair. A polymorphous ball exhibits different physical characteristics as it changes form as either a standard Marbleball, a feather-light Airball, an electrically charged Powerball or a dense and powerful Metalball. Players will have to solve their way through challenging levels packed with tricky obstacles, traps and mazes. With beautifully rendered 3D environments including Skyworld, Iceworld, Caveworld, Cloudworld and Lavaworld, Switchball features an advanced physics engine, allowing players to interact with objects just as they would in the real world.

* Inventive and fun puzzle-driven play based on real world physical interactions.
* Beautiful and elegant 3D graphics offer panoramic views of 30 incredible levels in 5 amazing environments â€“ Skyworld, Iceworld, Caveworld, Cloudworld and Lavaworld.
* More than 40 interactive objects including wooden blocks, sheets of cloth, spinning fans, magnets, cannons and many more.
* Morph the marble into a different ball, with unique physical properties including the metalball, powerball and airbal to more easily get through each area. 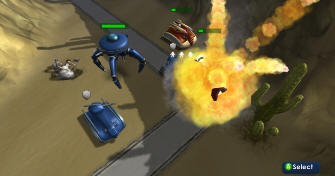 Commanders: Attack! is a gripping turn-based tactical game with a combination of strategic troop placement and entertaining head-to-head warfare. Featuring a 1930â€™s art deco look and feel, players will use missile launchers, bombers and infantry to amputate the enemiesâ€™ defenses and conquer the land. Players can choose to challenge the computer AI in a 15-mission campaign across three different landscapes or battle against three friends either locally or online in four intense multiplayer modes – Versus, Team Play, Player vs. CPU or same-system Skirmish. Commanders: Attack! will be available on Xbox LIVE Arcade and Windows PC this fall.

* Players can choose to challenge the computer AI in a 15-mission campaign across three different landscapes with two different difficulty levels or battle against three friends either locally or online in four intense multiplayer modes: Versus, Team Play, Player vs. CPU or same-system Skirmish.
* 15 Unit Types to choose from to fight alongside your Commander
* A unique look and feel with an intriguing 1930â€™s art deco, War of the Worlds aesthetic.

The early release thanks to Teamxbox.