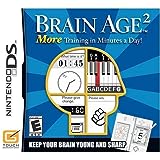 Nintendo is releasing “More Brain Training from Dr Kawashima: How Old Is Your Brain?“ also known as “Brain Age 2: More Training in Minutes a Day” worldwide, it brings the return of the educational puzzle game to the DS. As with any exercise, continuous training is required to help stay active, and now you can keep on training your brain with the second game in the Brain Training/Brain Age series. It features all-new exercises and DS Brain Age Checks, meant to challenge even the most trained brains.

Yesterday we “reviewed Brain Age: Train Your Brain in Minutes a Day“ also known as “Dr Kawashima’s Brain Training: How Old Is Your Brain?”, which you should check out if you didn’t play the original game so you get a more complete picture of what the series is all about. That game has been enjoyed by millions of people of all ages, including non-gamers. Inspired by the research of renowned Japanese neuroscientist Dr Kawashima, the new game is designed to help stimulate your brain and challenge your memory, math and perception skills. Once again you get to train your brain by exercising for just a few minutes each day, whether on the go or when relaxing. 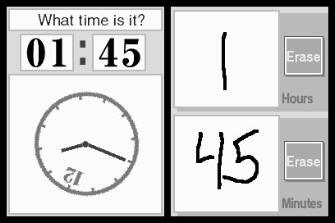 The game uses the same fun mental brain-training challenges format as its predecessor. Held like a book so both right- and left-handed people can play, you use the touch screen and microphone on the DS as you take 5 to 10 minutes a day to help your brain stay active with the 17 new exercises. All exercises are based on easy to execute mathematical, cognitive and language-based tasks. Again, you start out with the usually shocking DS Brain Age Check that measures the speed and accuracy with which you perform simple tasks to establish your DS Brain Age. Once this is established you will be set a regime to help stimulate your brain. The DS Brain Age Check allows you to see your progress on the inbuilt calendar. The goal? Get your brain age back to 20.

The DS Brain Age Checks take on a new form in this time as you’re tested on three randomly selected exercises including old school classic Rock, Paper, Scissors which asks you to name the position to either win or lose against the object shown, Memorizing 5×5 which sees you remembering the position of numbers on screen and Speedy Symbols which challenges your memory of symbols associated with specific numbers.

Exercises include Change Maker which challenges you on an everyday day task, to work out the right amount of money to hand back after a transaction as quickly as possible, Sign Finder, a twist on the original’s ’20 calculations’ test, and Piano Player which invites you to follow a music sheet shown on one screen and touch the corresponding piano keys on the touch screen. As your daily training continues, additional new exercises are unlocked, opening up a variety of new activities with varying levels of difficulty.

Here’s a list of all the modes and what they quiz:
* Rock, Paper, Scissors: Speak the symbol that beats the one on the screen, but be careful. Players may be asked to lose as well as win.
* High Number: Locate the number with the highest numerical value and touch it with the stylus.
* Serial Subtraction: Quickly subtract a small number from a larger one over and over again.
* Number Memory: Memorize a set of 25 numbers and their locations, then write down as many as you can remember in two minutes.
* Symbol Match: Examine the key to the left, then write the symbols that correspond to numbers as they appear.
* Piano Player: Play notes on a keyboard as the cursor scrolls over the sheet music.
* Memory Sprint: Follow the progress of a runner as he competes in a frantic race, then write down the place in which he finished.
* Math Recall: Math meets memory in this challenge. Solve a math problem, then remember the scribbled-out number and use it to solve the next problem.
* Sign Finder: Fill in the mathematical symbol that correctly completes the equation.
* Clock Spin: Examine clocks that are sideways, upside down or inverted, and write down the correct time.
* Word Scramble: Unscramble the letters and write down the word they spell.
* Word Blend: Listen to the overlapping words that come from the DS speakers, then write down the words on the Touch Screen.
* Change Maker: Touch coins and bills with the stylus to make the correct change.
* Block Count: Watch blocks that fall into columns, then write down the height of one of the columns.
* Calendar Count: Solve problems based on the calendar, such as “What day was it three days before yesterday?”

Other modes include a picture-drawing challenge, a connect-the-dots exercise, and an acrostics activity. 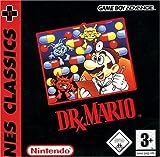 Making a welcome return to this new title is Sudoku. Featuring three difficulty levels from Basic to Intermediate to Advanced, there are over a hundred puzzles to keep you busy. A very welcome addition is an unlockable Dr. Mario clone called Virus Buster that you can play via touch screen controls to get a change of pace after all the mentally taxing training, you could also call it a secret Trojan horse to change non-gamers into gamers.

You get up to four save files on one game card. Sharing a game allows you to do Picture-drawing, Word Scramble, Number Memory or Change Maker quizzes with family and friends. As far as multiplayer goes you can also use DS Download Play to send a demo to friends or compete with up to 16 players in one of four modes. Three to sixteen players can also compete in the picture-drawing quiz to make it more fun, as everyone together decides on the best-scoring picture at the end of the quiz.

You’ve got 30 seconds to visualize these quizzes, press this video’s play button to start!
In conclusion I’d like to point out a minor weakness in the game. While the number of recognized writing styles (especially with numbers) seem to have been improved over the original, sometimes when you rush your handwriting some letters won’t be recognized and you have to erase and repeat it till you get it right. For example during Word Scramble you only get to write down one letter at a time and if the game won’t recognize your U or E handwriting it could end up doubling your playtime and significantly lowering your score. In the game’s defense of the one negative I could find was that in the back of the manual they explain how to properly write numbers and symbols in the game.

But otherwise there’s really nothing to complain, when I can get my casual gamer friends and non-gamer parents once again to try this out and like it, this looks like another surefire hit. So how much fun is Brain Age 2 (AKA More Brain Training) on a scale from 1 to 10?

FUN FACTOR – 8.5
If it’s not for you, you’ll know after a few minutes. The rest that do like it will enjoy a game that instantly makes you feels smarter the more tests you do. Because of the more full-fledged quizzes in the sequel, there are more interesting puzzles that are more fun to solve.

Graphics – 7.5
The in-game graphics are simple, but that’s logical for the quiz tasks.

Audio – 7.0
It can be a bit tough to hear the voices in Word Blend. Minimal sounds, but that’s just perfect for the puzzle tasks.

Ingenuity – 9.0
Improved ease of use makes math, puzzles and brainteasers all the more fun. The package is very well put together with the stylus pen controls allowing anyone and I mean anyone to simply pick it up and have fun doing all the included quizzes. There’s still some room for improvement in the handwriting recognition, which is why it isn’t perfect, but that’s what sequels are for. I still find it amazing that even if people score low, they’ll laugh at Dr. Kawashima’s floating head, will want to do better and try again, its addicting fun.

Replay Value – 8.5
After two weeks I’m gaining on that perfect 20 years old brain score and it feels like it’ll last me another month or more. The many varied challenges make this budget priced title all the better for delivering fun-for-the-whole-family and lasting appeal. Easy to learn, hard to master!