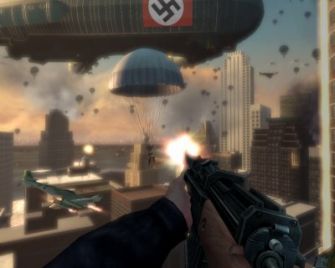 Set in the early 1950s, Turning Point gives us an alternate-reality history where the Nazis were triumphant in Europe in World War II and have launched an assault on the United States homeland! You play New York City construction worker Dan Carson, who turns into a reluctant freedom fighter in order to survive the invasion and fight back against the Nazi war machine.

“Always outmanned and outgunned, players must use guerrilla tactics and hand to hand grappling combat as they attempt to stop the world’s most notorious war machine”, Codemasters explains.

Turning Point is in development at Spark Unlimited and is out on PS3, Xbox 360 and PC this winter as one of Codemasters major releases. Now watch the first teaser trailer for the game!