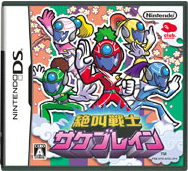 First Game and Watch Collection, then Tingle’s Balloon Fight (although that’s coming to Europe this year), and now members of Nintendo’s Japan-only club get another exclusive. Wired translates it’s a multiplayer-only (single-cart) game for two or three players, and controlled only with the DS microphone. The idea is that you’re a group of Power Rangers style heroes, and you do all of your moves by shouting their names in unison. Clever and really weird at the same time, which is why it’s given away in exchange for Nintendo points instead of sold (order on August 5th, receive it on September 11th). It’s not clear if they’ll do a 2nd print run as with Game & Watch Collection.

Use your voice, not your stylus, to command your heroes.“Sentai, Kick, Punch, Punch, KIIIIIIIICK!!” 😆