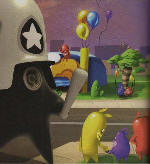 THQ has announced de Blob (The Blob), is currently in development exclusively for the Wii and Nintendo DS, and scheduled to spread color and fun to gamers worldwide in February 2008. Developed for the Wii by THQâ€™s Australia-based studio, Blue Tongue Entertainment, and Nintendo DS by THQâ€™s Helixe studio, de Blobâ€™s innovative style features ground and aerial maneuvers and color-spray gameplay that take full advantage of the Wii Remote and DS Stylus. Players will take on the form of de Blob in a bouncing battle to explore, liberate and revitalize Chroma City, which has been drained of all color and life by the evil I.N.K.T. Corporation.

About de Blob: de Blob is an action puzzle title that allows players to explore and liberate an alien city from the evil, monochromatic I.N.K.T. Corporation that has taken over the city and outlawed all color and fun from daily life. Playing as de Blob, gamers will embark on a quest to re-animate the city of Chroma, and bring spunk and character back to the oppressed, by splattering buildings, landmarks, and citizens with color. de Blob features an intricate single player campaign as well as a multiplayer experience that supports up to four competitors via split screen.

Take a look at the PC version of the Blob rolling around:
The game was conceived for the Windows PC for free by a team of nine students studying Game Design & Development at Utrecht Universityâ€™s School of the Arts in the Netherlands. At the time of conception, sections of Utrecht were being rebuilt and the principal task in creating the game was to convey how the railroad station area of Utrecht would look in 10 years. The city of Utrecht has since adopted the character of de Blob to be its mascot.

â€œIn the spirit of some of Nintendoâ€™s most innovative properties, de Blobâ€™s simple game mechanic will be fun and easy for core and casual gamers to learn and reveal unbelievably addicting levels of depth and complexity as they progress through the game,â€ said Kelly Flock, executive vice president of worldwide publishing, THQ. â€œWe look forward to unveiling de Blob at next weekâ€™s E3 press event.â€

â€œWith de Blobâ€™s innovative control scheme, a swing of the Wii Remote or flick of the DS Stylus sends de Blob ricocheting and swinging through the city with splashes of color in his wake,â€ said Steve Dauterman, senior vice president of product development. â€œGamers will be able to liberate the lifeless city of Chroma and create a collaboration of energy, music and color that is a reflection of each playerâ€™s gaming style.â€

Video from the Game Developers Conference ’07 by Joystiq.