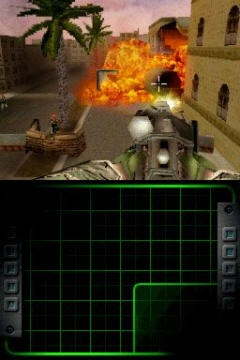 Two weeks ago Activision was handing out brochures to retailer sales representatives that outlined upcoming titles, one of them was Call of Duty 4: Modern Warfare listed for DS, aside from the FPS shooter coming to PC, Xbox 360, and PS3 in fall 2007. We brushed it aside as a misprint, but luckily we were wrong.

Games developer n-Space is working on Call of Duty 4 for DS, and initial details reveal what could be an FPS experience to rival Metroid Prime: Hunters. The story of the DS version will be the same as the PC/console versions, but you’ll take control of different characters. To quote the developer: “The story takes place in modern day in a fictitious setting where an ultranationalist military leader in Russia is raging a civil war while at the same time funding a coup in the Middle East. You play as British SAS and US Marines in a variety of missions including the gunner in an AC130 gunship, crew member of a Blackhawk, machine gunner in a Humvee and of course as infantry in array of locations from the Middle East to Russia to the open waters in a cargo ship.”

Read quotes from the interview with the producer at n-Space, Sam Nouriani, below:

IGN: Does the DS build of the game feature unique missions or level designs and can you give us a few examples?
Sam; In the Middle East players experience an ambush and frantic chase in a Humvee, decimate enemy lines in a Blackhawk helicopter which comes under heavy fire, and rescue team members from a fallen Blackhawk. In Russia players provide air support for ground troops from an AC130, penetrate a giant missile factory with multi-tiered encounters as you battle from catwalks, covertly infiltrate a Chechen compound in the cover of nightfall, and breach an underground silo and war-torn bunker. These different scenarios along with a number of other environments such as a cargo ship really mix up the variety of missions and level design. In addition, we have mini-games such as diffusing and placing charges using the stylus to break up the action and add even more variety of gameplay.

IGN: What different weapons can you use?
Sam: The player has access to weapons such as a silenced SMG used for covert operations, sniper rifles for taking out enemies at a distance, RPGs for taking out heavy armor, shotguns for close-quarter engagements, grenades including stun and frag for a range of different situations and fixed emplaced weapons.

Picking up weapons is as easy as double-tapping with the stylus. We have mimicked the controls on the d-pad to the buttons so that both left and right-handed players enjoy the same experience.

IGN: The Call of Duty franchise is famous for its scripted scenarios. How have you been able to translate that to the handheld format? Please cite a few examples.
Sam: We have been able to pack as much of the Call of Duty experience onto the DS as possible. There are tons of great sound effects, battle chatter and other VO, awesome music and tons of stuff happening on the screen from huge firefights, mortars screaming down on you, tanks busting through walls, helicopters getting shot down, lighting strikes in the open water while you are taking out enemies on a rocking cargo ship. It is action packed!

IGN: What are you using the bottom screen for?
Sam: While most of the action takes place on the top screen, the bottom screen provides top-down view of the level and a compass with the objective location, while a UAV provides real-time radar scans of friendlies as well as enemies. The stylus is primarily used to aim your weapon with precision detail, but players can also use soft buttons to select different weapons/grenades, toggle ADS (aim down site), mount emplaced guns, and perform any mini-games on this screen.

IGN: A smooth fluidity is very important for first-person shooters. How smoothly does Call of Duty 4 for DS run?
Sam: Great framerate is a must for all first person shooters, especially Call of Duty. There is nothing more frustrating that trying to shoot an enemy but being unable to do so because of the performance. The guys at n-Space certainly have an amazing engine that delivers totally fluid performance all the time, even when there is a ton of stuff happening on the screen.

IGN: Is there a multiplayer mode? How does it work?
Sam: Call of Duty on the DS supports 4-player ad-hoc multiplayer. That means up to 4 players, each on their own DS, can connect wirelessly to battle it out in a number of multiplayer maps and gametypes. We also support single-cart multiplayer for our smaller maps which means that even if only 1 person has Call of Duty, other players within the wireless range can download the map and join the session. While single-cart multiplayer allows players to experience a few smaller maps, players will ultimately have to have their own cart to play the bigger, more detailed levels.

IGN: What options are available to gamers during deathmatch competitive play?
Sam: Players have a number of server settings including time limit, score/capture limit, respawn time, map, map rotation, friendly-fire on/off, team/weapon selections, etc. When in game, players can also battle to activate a UAV, giving their team the advantage of being able to spot enemies on their radar for a limited period of time.

IGN: Visually, what are you most proud of in the game?
Sam: There are a ton of effects, etc that look great, but the environments are simply stunning. With everything running at such a great framerate, the whole game comes through looking awesome.

Clearly the Nintendo DS has a lot more power than people previously thought to be able to handle those console next-gen graphics on the handheld… yeah I’m joking. But not to put it down, because the FPS game Metroid Prime Hunters plays and looks awesome on DS. Looking forward to this.