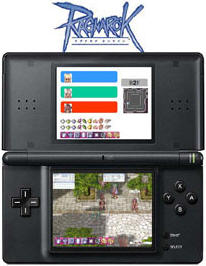 Ragnarok Online is coming to Nintendo DS in Japan. The release date is set for sometime in 2008. Apparently at an Akihabara press conference with Ragnarok publisher Gungho Online, the game was announced as well two other DS titles: a fishing game and a flower arranging game. Ragnarok Online on DS is a real-time action-RPG that’ll use Nintendo’s online Wi-Fi Connection.

Traditionally PC focused, Gungho Online has been refocusing its strategy and is developing games for the DS as well as the PSP. Translated from Japanese by Kotaku.

“Basic gameplay is exactly the same, although some concessions have been made to make the game’s largely offline story mode more approachable. The main game has you controlling Ares, a mild-mannered kid who wants to start up his own guild and be a great adventurer like his father; you make this happen by recruiting party members and carrying out quests in the realm of Rune Midgard, building up your gang to the point where they earn new jobs and more powerful skills.

The Nintendo DS version runs largely off the stylus, which serves the same function as the mouse in the PC game. You tap the screen to attack enemies and retrieve items, and the game occasionally asks you to draw circles and other designs in order to pull off spells and skills. Ragnarok veterans have little to fear: Most of the jobs from the MMORPG are available, along with two brand-new jobs — Dark Knight, which lets you unleash special moves that sap your hit points, and Shaman, which puts magic from a wide variety of elements at your fingertips. The DS Ragnarok also has an extensive online component — up to three people can team up over a wireless or Wi-Fi connection and challenge the Tower of Mirages, a 50-floor randomly generated dungeon that’s home to untold treasure and monsters,” translates 1UP.