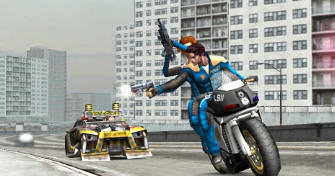 The original Pursuit Force sold 200,000 copies on PSP. Developer BigBig Studios are now working on the PSP & PS2 sequel Pursuit Force 2: Extreme Justice, which aims to go beyond just leaping from speeding car to car on the highway while firing bullets into the sky.

Lead designer Chris Whiteside explained to IGN in an interview that “Many people commented on forums that they wished there was a little more ‘meat on the bone’, and with Pursuit Force: Extreme Justice you get the whole cow“. Of course, much of the original Pursuit Force’s lightweight leanings were intentional according to BigBig, with the game specifically tailored to suit on-the-go gaming with PSP. “The irony is that after feedback from both the consumer and the press, we realised that people wanted a little more from the Pursuit Force universe”, continued Whiteside. “We found that most gamers played the game in long bursts and at home. And to be frank, the game wasn’t designed for this, hence the omission of a storyline and the inclusion of missions that lasted for around four minutes.”

While the team’s initial vision was somewhat constrained by those portable considerations, fan feedback has meant the developer’s now free to pursue its original ambitions. To quote: “With Pursuit Force: Extreme Justice we have evolved, redesigned and added a lot of content, and the game is designed to be as pleasurable on the go as it is on your big TV at home. We have included more heavyweight modes, such as the Story Mode, and more lightweight modes such as Challenges“. For multiplayer PSP players can enjoy four-player ad hoc wireless matches, the PS2 game features a two-player split-screen multiplayer mode.