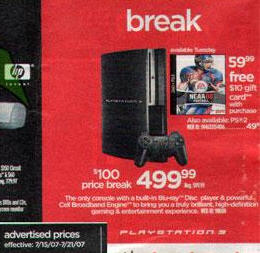 Sony has not confirmed the PlayStation 3’s $100 price drop from $600 to $500 officially, likely because they wanted it to be a surprise at their E3 press conference next Wednesday (July 11th), but Gamedaily received confirmation from the retail sector that the PS3 will be dropped to $499.99 next week!

Sony recently admitted they were trying to â€œrefineâ€ how much it could afford to cut the price of the PS3. The PS3 price drop rumor spread like wildfire across the internet today when a new advertisement from Circuit City showed up (shown above).

A merchandising manager at one of the world’s biggest retailers has confirmed that the price drop is indeed retail-wide and it’s scheduled to take place on July 12th, although the first wave of ads to promote the PS3’s new price won’t show up until Sunday, July 15th. Hopefully this will be a worldwide price drop and at E3 Sony will show some more upcoming must-have games that make the console worth paying for (ignoring the multimedia player features there).