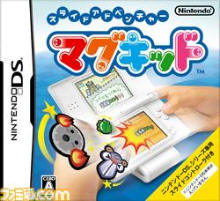 Nintendo of Japan announced they are making Magkid: Slide Adventure for the DS. The game is controlled by placing the DS on an included Stand, then sliding the DS left to right while the stand sits on a table. By moving it, you move the main character on the screen. It’ll be released in Japan on August 2nd, 2007.

By using an accelerometer, like the one used in the GBA minigames of WarioWare Twisted, the game replicates the way you can hold a magnet underneath a table to move a metal object on top of the table. It’s not a real magnet obviously, as that would erase the game’s cartridge, I think.

Maybe someone can figure out what the heck this game is about by looking at Famitsu’s Magkid screenshots. Via Wired