Home » News » Fatal Inertia Xbox 360 release date is September 11, but delayed beyond that on PS3

Fatal Inertia Xbox 360 release date is September 11, but delayed beyond that on PS3 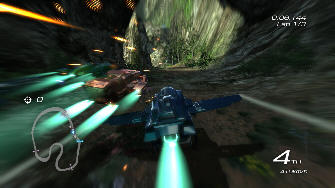 Koei has announced when they will launch their futuristic racing game Fatal Inertia, the Xbox 360 release date is set this year on September 11 in America and on September 26 in Europe.

The former PS3 exclusive has been delayed to an unknown release date on the PS3 because of Unreal Engine 3 programming issues. The game will run at 720p and features fast-paced single and online multiplayer.

A spokesperson for the developer said an Xbox Live demo can be expected sometime before its September 11 launch.

Fatal Inertia is set in the 23rd Century and mixes street racing, demolition derbies and rallying with a futuristic setting where machines no longer need wheels and the laws of physics govern all. The sport is called Inertia and it’s one that offers a heady mix of speed, combat and real world environments that can be used to make your victory and break your opponents.

“By designing Fatal Inertia’s gameplay around a physics engine it not only allowed us to create a truly different driving model, but it also helped us create a set of dynamic weapons with multiple tactical applications,” said Lead Game Designer Michael Bond. “We’ve based many of the game’s weapons on straightforward physical principles, and by doing so we’re giving players the freedom to come up with their own creative ways of using them- ways that even we are still discovering.”

â€œKoei has been at the forefront of creating the most engaging action games, so with Fatal Inertia weâ€™re now lending our action game talents to the racing genre to deliver an experience that is as fun as it is fast,â€ said Senior Vice President of Koei Corporation Amos Ip. â€œArmed with an eclectic variety of weapons and racing challenges, plus elegant and intuitive driver controls, Fatal Inertia is quite simply bringing high-speed fun and excitement back to the combat racing genre.â€