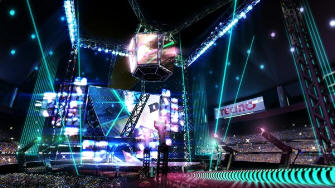 This is the first online PC game in the series. Under terms of the agreement DOA Online will be developed by Tecmo’s online game development studio “Lievo Studio”, and Shanda will provide its online game-related experiences and technologies to assist development. The game is expected before the 2008 Beijing Olympic Games, says Tecmo.

To quote: “The Dead or Alive series is one of the most popular fighting franchises created, and it is a great honour for Shanda to partner on the game’s online version. DOA ONLINE will be developed on both PC and Shanda’s EZ Platform. Its gamepad support will deliver to users a fantastic console gaming experience,” said Shanda boss Tianqiao Chen. “By leveraging our strong operating platform and advanced come-stay-pay revenue model [similar to many MMOs], we are confident that DOA Online has the potential to achieve great success in China. In the future, the two parties will continue to actively seek cooperative opportunities in online entertainment-related fields.”

Tecmo president Yoshimi Yasuda added, “DOA Online is not a simple replant from the console platform to the PC platform. It is a completely new game featuring the characteristics of a PC online game. We are confident that the game will become one of the most successful online games in China.

“As China’s largest online game company, we believe Shanda is the best partner of Tecmo’s global game platform Lievo in China. Additionally, we have the technical capability and actual achievement to implement worldwide online fighting matches in our competitive fighting game for the console platform. Combining Tecmo’s strong video game development and designing experience, and Shanda’s expertise in online game operation, we are confident that our future cooperation will be a highly successful one.”