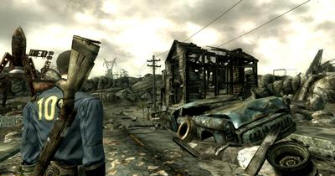 Through the Fallout 3 teaser we already knew the Fallout 3 RPG would be hitting PC, Xbox 360 & PS3 in fall 2008. This weekend Bethesda held a press event for the newest sequel in the Fallout series. Outside of the newly shown Fallout 3 screenshots, there was lots of info unveiled. Here’s the list:

* The game takes place 30 years after the events Fallout 2. The events of the much-maligned Fallout: Brotherhood and Fallout: Tactics never happened in the universe of Fallout 3.
* The game will feature a day/night cycle and changing weather.
* There will be 21 collectible bobbleheads hidden throughout the game for Easter egg lovers.
* The game will feature 20 licensed songs from the ’40s that will be played through radio stations accessible via your on-arm PIP-Boy and radios peppered throughout the game world.
* There will be no drivable vehicles in the game, but you can travel between locations through subway tunnels.
* There are children in the game, but the team isn’t sure yet if they will be killable as they were in the previous Fallout games.
* The game will have no multiplayer mode and no demo is currently planned.
* Downloadable content and player-created mods are being considered, but nothing has been finalized.
* The game will feature nine to 12 endings based on how you’ve played it.
* The game’s version of Washington D.C. will include iconic landmarks and the general topography of the real city, but will not be a street-by-street recreation. The downtown area represents about one quarter of the in-game map.
* There will be fewer non-player characters in Fallout 3 than in Oblivion, owing to the game’s post-apocalyptic setting. Almost all the NPCs will be killable.
* You’ll be able to hire mercenaries to aid you as in the first Fallout game. You won’t have much direct control over them.
* Among other statistics, the demo’s loading screens contained a mysterious metric of “corpses eaten.” “We’re not talking about that stuff,” Executive Producer Todd Howard said when asked about the stat.