Wario: Master of Disguise review for the DS platformer

Wario: Master of Disguise on Nintendo DS would’ve been Wario’s sixth Wario Land platformer, if it weren’t for the name change. But that drives home an important point early on, this isn’t the next Wario Land due to the new touch screen controls.

Wario is the star of the show in this new platform game that utilizes DS’ new controls, including the touch screen and stylus as well as the microphone. Wario is a jack-of-all-trades and in this game it’s all about making the most of a host of disguises, each with their own special abilities (similar to Wario Land’s hat power-ups), as the bad-tempered anti-hero starts his adventure at home.

When Wario sees a TV series about a thieving master of disguises, he dives through the television screen, steals the thief’s quick-change wand and takes over the entire show. Episode after episode, he breaks into exotic locations, such as a luxury liner, watery ruins and an Egyptian pyramid. 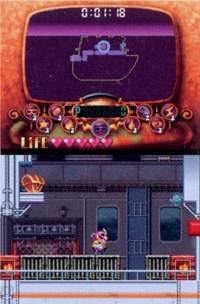 Beginning as a tackling thief, Wario will unlock seven more disguises throughout his adventures. The stylus allows you to switch disguises on the fly, by drawing symbols on the Touch Screen. A circle around Wario’s head will transform him into a helmet-wearing spaceman who can fire laser beams. At other times, artistic abilities might be called for and you can change into Arty Wario who sports a fetching beret and can paint new blocks to reach previously inaccessible areas. Or don your cape to become a superhero by the name of Wicked Wario and blow into the DS microphone to fly into the air. While these first few are fun, the other disguises are pretty much useless, because outside of the specific task they aim to accomplish their use is very limited. For example, take Captain Wario who can only be used for traveling over water or Sparky Wario who’s only useful in darkness. The story mode is the only option to play in the game as you work through each new level (their called episodes) and figure out how and when to use each disguise.

Wario’s movements are controlled by the +-Pad (aka Directional-Pad) or the face buttons (aka ABXY buttons) on the other side of your DS, but all of his other actions are controlled by tapping the touch screens. Want to shoot? You’ll have to tap the screen repeatedly. Want to fly? Blow into the microphone. *sigh* It’s freaking frustrating to control, it feels like a tacked on touch control scheme from a first-generation game. This is why I mentioned at the beginning it’s not Wario Land, because the controls ruin the gameplay. I tried playing the DS while holding it and my hands cramped up, so not only are the controls bad, you basically have to have a flat surface to lay your DS on to be able to play the game in any decent way. Even allowing players to map the action/shoot button to the left or right trigger could’ve solved this problem.

While having multiple disguises in your arsenal is handy, switching between them isn’t. The symbols you have to draw to switch between them are a little too similar, so half the time the game gets confused whether or not you were drawing a square with a slash through the middle for Arty Wario or a circle with a slash through the middle for Scientist Wario, and you end up getting Spaceman Wario, which is actually just a circle to draw.

Watch Wario get some treasure and solve a mini-game with some paint and his wits.

Wario is also known for his mini-game fest WarioWare: Touched on DS and similar mini-games return here when you open each chest in the game with a touch of on the lock. You have to complete the mini-games to receive the treasure inside. You have to play one of eight stylus-driven mini-games that grow more difficult as the game progresses. After completing each new mini-game you get to play it whenever you want to from the title screen. The mini-games later on can be quite challenging, but sadly repeated playing will only lead to boredom. 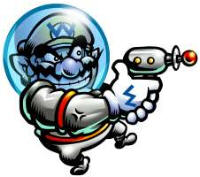 In the game Wario travels the globe in ten missions that span nine exotic locations based on different TV shows. The player must attack many enemies found in each location (pyramids, cruise ships and the like), so keep collecting those hearts, and also use Wario’s disguises to get past puzzling obstacles. Remember the places you can’t reach, because there’s some backtracking involved as well. You can replay levels once you have unlocked new powers and see what hidden treasures you can uncover.

As a conclusion I’d like to note that the comedy can be summed up in Wario’s thief alias repeatedly mentioned words: “Silent but deadly! Smell the Purple Wind! Bye, loser! I’m off to get rich!” If you’re still into fart jokes you’re good to go here. If you’re not sure if you still enjoy fart jokes, I’ve got a test for you to go through if you watch the following video and laugh or at least crack a smile, then you’ll be fine.

That said, you’re not playing Wario: Master of Disguise for depth in storyline and as a result the game is great for quick plays, especially if you like the treasure gathering mini-games. Outside of end-level saving, the game allows you to exit a level at any time and create suspend data to resume the game from the point where you left off, when you turn your DS on again.

But there’s still some platforming/puzzle fun to be had here. That’s why VGB scores games on their fun factor.

FUN FACTOR – 6.66
This Wario is evil. As a Wario fan, try as you might to love this, its unforgiving controls take away from any creative level solutions you come up with. But definitely one to try out for those of you used to a focus on puzzle gameplay, like fans of Wario Land II and Wario Land 3.

Graphics – 7.5
Graphics in-game and in cut-scenes are very polished. The art for Wario and his enemies is great. Nice cartoon-y visual style. What you’d expect from a 2D side-scroller.

Ingenuity – 4.0
Lacks polish and variety in the levels. Exploring levels is made frustrating “thanks” to the touch screen controls for which the game offers no alternative settings. It’s a passable puzzler on a handheld already saturated with mini-games. Hopefully developer Suzak will learn from this or leave the next sequel to Nintendo’s R&D1 to bring back their finishing touch.

Replay Value – 7.0
Only worth a replay if you’re into increasing your score. The 10 to 15 hours it takes the first play through should be enough, though. That said, if you can overlook its weaknesses, then puzzle and Wario fans should definitely give it a chance, because there’s lots of loot to score.