Geometry Wars: Galaxies on DS and Wii returns the series to the big (and small) screens with Geometry Wars: Retro Evolved included as a bonus! Bizarre Creations hands its Geometry Wars franchise to developer Kuju, the team behind Battalion Wars. The game takes everything that made Retro Evolved the best multi-direction shooter around, and besides adding a new campaign, adds multiplayer modes. But there’s more than just an enlarged single-player experience, the four other game modes are: Co-op, Simultaneous, Versus, and Hot Seat. The developer showed off the first gameplay footage of the game in action (watch it below) in a 1UP preview. 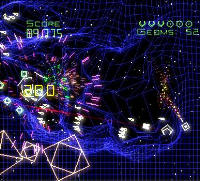 In the interview Sierra producer, Roger Carpenter, explains: “The principle is very simple. The Galaxy is full of solar systems. The solar systems have lots of planets within them, and each one of those is a battlefield. You’ve got to do battle with each planet’s inhabitants… all in a Geometry Wars style, of course. Each of these worlds, full of angry circles, squares, and diamonds, will culminate in a boss battle of sorts, just not in the sense of ‘here’s a big thing and it’s really difficult to kill.'” Release in fall 2007. See the new weapons (like hotshot moves) in this video preview.Click on the bottom-right corner arrow to view it full-screen.