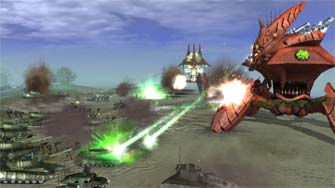 Sega has announced that their upcoming RTS title, Universe At War: Earth Assault, which we previewed back in February, will be the first 3rd party “Windows Vista – Live” title. What this means is that PC players, playing the game on Windows Vista, will be able to battle in online multiplayer with their counterparts playing the game on Xbox 360. Including in a persistent style â€œConquer the Worldâ€ mode across both formats.

Hopefully this means that more third-party companies will jump on the bandwagon and make their online titles cross-platform between PC and Xbox 360. Other Windows Vista games that support this feature include Halo 2, Shadowrun and the upcoming Uno.

Universe At War: Earth Assault was first announced last February exclusively for PC, but following the success of EA’s console RTS titles for 360, Battle For Middle Earth II and Command & Conquer 3, Sega decided to also bring the game to Xbox 360, which is a new trend as of late.

I’m looking forward to this game cause it’s made by Petroglyph, a team of ex-Westwood guys, who are the people that made Command & Conquer. –via Gamasutra