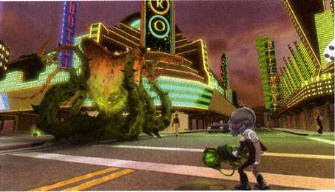 The magazine also mentions THQ will be bringing The Blob game exclusively to Wii. The Blob is based on the free PC game The Blob. The Blob is a physics-based puzzle game.

According to Joost van Dongen, the lead programmer of the PC game: “It is a 3D game in which the player controls a ball of paint rolling through the city. The ball can absorb coloured NPCâ€™s to become larger and change its colour. With the paint, the player can then proceed to paint the entire city. Almost everything is paintable: buildings, trees, cars and using the paint trace even the ground. The main goal of the game is to paint all 17 landmark buildings. Hardcore fanatics can also try to collect all 50 coins that are hidden around the level.” Expect it in 2008. — Translated by Neurope