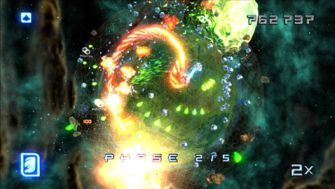 First up is an updated version of a game called Super Stardust HD (Originally released for the PC and Amiga back in the day), which you can purchase from the store for $7.99 (It will hit the European Playstation Store tomorrow). The gameplay is a shooter similar to that of Geometry Wars or Blast Factor, and it tasks you with defending five separate planets from annihilation by asteroids and enemies.

Also available is the 2nd GTA4 trailer, which you can now download and watch on your TV in high definition. And of course if you haven’t seen the trailer yet, then give it a look here at VGB.

A brand new demo also debuted to the Playstation Store today for the robot-fighting Dynasty Warriors spin-off: Dynasty Warriors: GUNDAM. As you’d expect, the game combines the hack-and-slash action that you know and love with the mechs of the GUNDAM anime series (including mecha from Zeta Gundam and ZZ) for a peanut butter & chocolate effect. The full game will be releasing on the Playstation 3 and Xbox 360 late summer (No exact date has been announced yet).

Finally, Sony has issued another firmware update: 1.82. While 1.80 was released last month, the company has since tweaked it to 1.81 (updating support for some PlayStation 2 online games), and today’s update introduces playback support for AVC High-Profile format video. However, update 1.82 has also changed the backward compatibility status for some PS2 titles. Gamers can check to see if their favorites were affected on Sony’s backward compatibility search site.