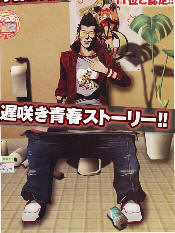 One of the most unique upcoming Wii titles is Grasshopper’s No More Heroes, the follow-up to their surreal GameCube action game Killer 7.

1. It’s Not Just Another Wii Mini-Game Collection
No More Heroes stands out among Wii releases by being . . . well, a real game. In a sea of insubstantial minigame collections, a meaty single-player adventure may seem positively ambitious (Unless you’re Zelda: Twilight Princess). It’s no accident, and Suda has no shortage of opinions on the state of Wii software.

“Let me tell you one thing,” he insists. “I’m not looking to other developers’ Wii titles as reference points during the creation of No More Heroes . . . I think a lot of developers are preparing original software on Wii presently, but at least in Japan, you can’t deny the fact that developers are planting the soil on this new platform with unoriginal and entirely boring game concepts.”

2. It’s Not A Killer 7 Rehash
Killer 7 was wildly creative, but it’s complex mix of politics, religion, and insanity left a lot of players confused and lost, but hopefully that won’t be the case with this follow-up. “The story of No More Heroes proudly represents the antithesis of Killer 7’s,” Suda explains. “It’s a story of the maturation of a young man, so the narrative should be more understandable for players.” So, rather than juggling seven characters, each representing aspects of the protagonist’s fractured psyche, here you only have to wrap your head around one hero, the amusingly named Travis Touchdown. (Ugh . . .)

Travis begins the game as your ordinary everyman who lucks into a killer (pun slightly intended) find via an Internet auction site. What find is that you ask? It’s a beam katana of course! (think: lightsaber). Armed with this new weapon, he accepts a gig as a hit man . . . (what other job lets you take advantage of a beam katana and get away with it?) and later finds himself caught up in an international assassination competition (what a mouth full, eh) against the world’s finest killers.

Sound as preposterous as Killer 7’s story? Well there is this little detail: “He’s actually a huge manga, anime, and hardcore fighting otaku [fanboy],” says Suda of his new hero. “Travis figures that if he’s going to turn his hobbies into something practical, he’s going to become a hired killer.” And at least with that one point, Suda hopes gamers will be able to relate with Travis . . . cause, you know, who wouldn’t take a job as a hitman if they bought a beam sword on Ebay? Exactly.

And it’s not just story where No More Heroes diverges from Killer 7. It wildly differs in both structure and gameplay. Killer 7 featured simple, linear stages that were on-rails, where the player simply chose which direction to go without directly controlling the action. Naturally, that didn’t sit well with critics, and as a result, No More Heroes has been turn in the polar-opposite direction. You now travel across a wide-open world (GTA-style) and fight with no restrictions. The fictional city of Santa Destroy (. . .), CA provides a suitably quirky backdrop to the action.

Thankfully, you’re not limited to crossing this sprawling metropolis on foot. “Players will need to use Travis’ bike, the Schpel Tiger, to ride from location to location within Santa Destroy,” says Suda. “While he’s in transit, I don’t expect Travis to encounter enemies, but there might be set instances where there will be on-bike battles.”

3. It Definitely Is Not Red Steel All Over Again
Everyone was all gung-ho about slipping into the shoes of a Katana-wielding martial arts master when Ubi-Soft’s Wii launch title Red Steel was first unveiled. And why wouldn’t you have been? It certainly looked very cool to swing around a rod-like controller and make your in-game character slice & dice accordingly. But as that game taught us, making a realistic depiction of sword-fighting isn’t as easy as it seems. The collaboration between the person’s movements and the on-screen sword have to be done just right for it to be a success, and not feel haphazard and imprecise.

Luckily, Suda appears to be fully aware of this potential pitfall and is working to not repeat the same mistake for No More Heroes. “If you’re going to make a katana-based game, you’re going to run into a lot of problems unless you adopt an advanced camera system,” he says.

The game’s dynamic camera makes it easy to determine how to best strike your opponent. The precise motion you make with the Wii Remote isn’t actually that crucial, but the height and angle of your attack are. Expect to encounter a bit of a learning curve, but skilled players will soon be able to dismember and decapitate foes, and even mix in a few wrestling-inspired finishing moves (like a skull-crushing suplex) using the Nunchuk. Overall, it’s a far more brutal, visceral approach to sword combat than we’ve seen in the past. “The Wii is an entirely new device and requires a completely new approach to game design. You can’t take your past experiences into a Wii game and pray they work just as well as before.” says Suda.

Let’s hope that this game lives up to the hype and learns from not only the mistakes of Killer 7, but also those of Red Steel. My major beef so far is actually with the voice acting . . . I mean shouldn’t the days of horrid voice acting be over? Have we learned nothing from Sega’s voiced games of the past? Nonetheless, check out both the original trailer (Back when it was known simply as “Heroes”) and the newest Game Developer’s Conference trailer for No More Heroes as make up your own mind whether or not Suda is in-fact, headed in the right direction. —- Quotes via 1up