Home » News » Manhunt 2 rated Adults Only by ESRB in the USA, banned in UK & Ireland

Manhunt 2 rated Adults Only by ESRB in the USA, banned in UK & Ireland

Thanks to Adam for sending in the tip. Take Two, Manhunt 2’s publisher, just announced that in America the ESRB has issued an initial rating of AO (Adults Only) for Manhunt 2.

To quote Take Two’s response: “We believe the process of rating videogames is to help people make informed entertainment choices and not to limit them. Manhunt 2 was created for mature audiences and we strongly believe it should receive an M (Mature) rating, aligning it with similar content created in other forms of media. We are exploring our options with regard to the rating of Manhunt 2.” 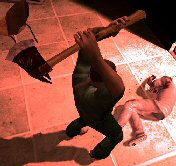 No major retail chain will sell Adult Only rated games, so unless developer Rockstar can get the game’s violence and sexual content down to a Mature rating, it won’t be for sale at many stores.

Meanwhile in the UK the BBFC has outright rejected Manhunt 2 for certification, even before their ratings board ELSPA could even certify the game. This means that it cannot be legally supplied anywhere in the UK. The game was submitted in both a PS2 and a Nintendo Wii version.

David Cooke, Director of the BBFC said: â€œRejecting a work is a very serious action and one which we do not take lightly. Where possible we try to consider cuts or, in the case of games, modifications which remove the material which contravenes the Board’s published Guidelines. In the case of Manhunt 2 this has not been possible. Manhunt 2 is distinguishable from recent high-end video games by its unremitting bleakness and callousness of tone in an overall game context which constantly encourages visceral killing with exceptionally little alleviation or distancing. There is sustained and cumulative casual sadism in the way in which these killings are committed, and encouraged, in the game.

“Although the difference should not be exaggerated the fact of the game’s unrelenting focus on stalking and brutal slaying and the sheer lack of alternative pleasures on offer to the gamer, together with the different overall narrative context, contribute towards differentiating this submission from the original Manhunt game. That work was classified “18” in 2003, before the BBFC’s recent games research had been undertaken, but was already at the very top end of what the Board judged to be acceptable at that category.”

“Against this background, the Board’s carefully considered view is that to issue a certificate to Manhunt 2, on either platform, would involve a range of unjustifiable harm risks, to both adults and minors, within the terms of the Video Recordings Act, and accordingly that its availability, even if statutorily confined to adults, would be unacceptable to the public.”

While to a certain extent I can agree with the decisions of the US and UK ratings boards, you have to wonder why it’s ok for the film industry to release sadistic murder movies on DVD to stores everywhere, yet it’s not ok when a game does the same. Even if movies are seen as passive entertainment and games as active entertainment, in both cases the person watching can’t un-see anything. Still banning it is overdoing it, it should be every adult’s choice to make whether they want to buy it or not. On the other hand, they had to play through the game and it might be more justified than we think. It’s too early to call the ratings and bannings an over-reaction until Manhunt 2’s (now tentative) release on July 9th in America and July 6th in Europe.

To Be Continued for sure. In the meantime, here’s a trailer:

Update June 21: Sony has confirmed that, like Nintendo’s and Microsoft’s policy, it will not allow playback of AO-rated games on its systems.