Cruis’n Wii sequel next in the arcade-style racing series? 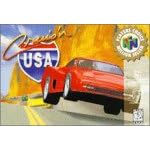 The first three games in the Cruis’n series, which were subtitled USA, World & Exotica, appeared in Arcades and on the Nintendo 64 in the 90s, followed in 2001 by the so-far last in the series on GameBoy Advance subtitled Velocity.

EB Games has put the release date on November 1st, 2007. The price is set at $29.99, which could mean this is either a budget release or a compilation pack of the above mentioned games in the series.