Bloody Wolf (TurboGrafx-16, 1 player, Rated E10+ for Everyone 10 and Older – Animated Blood, Violence, 600 Wii Points = $6): Enter alone, deep into enemy territory to rescue the kidnapped President in this overhead-view action shooter. Take on the role of a commando in a Special Forces team and face your enemies with an onslaught of weapons, including machine guns and grenades. Earn valuable information, weapons and items by rescuing POWs. Fight your way to the end of each stage and defeat the boss by effectively using your weapons and equipment. This port of the insanely popular arcade game features refined graphics, story and cut-scenes, making this action game a must-have. This new and enhanced version includes the never-been-told second half of the story that was left out of the arcade version. 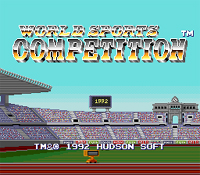 (TurboGrafx-16, 1-5 players, Rated E for Everyone, 600 Wii Points = $6): Play through a total of 18 Olympic events in this action/sports title. Players compete in six categories of events that include shooting, archery, rowing, swimming and track and field. The game features Olympics mode, where you play all the events over the course of a few days, and Training mode, where you can choose individual events to play. After practicing in Training mode, go for the gold in Olympics mode and break world records. Depending on your play time and ability, you can enjoy the game a number of different ways. Gather friends and play in competitions with up to five players to get even more out of this great game.

NES Open Tournament Golf (NES, 1-2 players, Rated E for Everyone, 500 Wii Points = $5): We all knew that Mario was a top-notch plumber, but did you know that he could also be a world-class golfer? You can challenge another player in Stroke, Match and Tournament modes. Play on three fantasy courses in the USA, the UK and Japan and try to win a million dollars. Make sure you keep an eye on the wind and distance to the hole before selecting your club, or else you’ll be racking up some high scores – which is exactly what you don’t want to do in this game. Whether you’re a beginner or an experienced golfer, NES Open Tournament Golf is perfect for those days when you just can’t get to the local golf course.