While Custom Robo Arena for Nintendo DS may be the first worldwide release of the game, a GameCube console version was released outside of Japan in America a few years back, but the series actually started out on the N64 back in 1999 in Japan. It’s no surprise the new DS game’s 3D fighting looks like a portable N64 game.

In the future of Custom Robo Arena mankind relies on tiny, telepathically controlled robots to perform such dangerous tasks as deep-sea research, disaster relief and interplanetary exploration. These popular and easily customized Robos are also a popular form of sport (think BattleBots). In the game they battle in holographic arenas called holosseums, these can be anything from a magma field to an alley in the real world. But this near-future world is no utopia, criminals are using the mini-machines as weapons and the Custom Robo phenomenon has grown into a problem for the whole society. 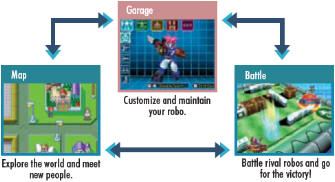 Custom Robo Arena mostly takes place in the fully 3D holographic battle arenas called holosseums. You launch into the arena via a Robo Cannon, which shoots the Robo Cube that your mini-robot is stored in into the playfield, you control the speed of the cannon and how quick your Robo deploys and gets up to make the crucial first move. Then players put their Custom Robos against one another in fast-paced, melee-style combat where combos deal the most damage.

Each Robo can be customized with different parts, from arm-mounted guns and bomb launchers to specialized pod weapons and jump legs that all have their own unique behaviors, and as a result each of them is of varying strategic importance. Some pods pursue the opponent, while others lie in wait for the enemy to draw near. Players customize their robots by swapping out weapons, legs and body frames to create the ideal combination of attack, speed and defense to suit their gaming styles. With 150 different parts total, there are thousands of combinations with each offering different statistics for players to experiment with.

You use the touch screen to choose parts for the Robo and clean it up when the Robo gets dirty. Cleaning your robot after every few matches is key to maximum Robo performance or else it will drag down your stats and a “dirty win” will earn you less money. So hopefully you won’t mind polishing every part of the robot, including its crotch, with your DS stylus. All in a day’s work . . . Note: The Robo only does the eye-opening animation as you register it before playing a new Robo for the first time, it’s not like he’ll . . . you know.

Single player: The Story mode revolves around a young boy who just moved into the town of Midheart and joins a new school. There he meets Robo-battle champion Liv, a young girl who won the last championship partnered with her brother. Now, she’s looking for a new Robo Commander to groom into a Robo Cup champion, and in this young boy, she sees remarkable potential. So he joins Liv and Dennis’ team the Numero Unos. However, Liv has a secret, and when the young boy discovers the truth about his new partner, his world changes forever.

As your adventure starts you’ll see Custom Robo Arena plays like a role-playing game in which players walk through the 2D, overhead futuristic town setting similar to the Pokemon series and interact with other townspeople, as the team struggles to help out everyone who needs helping out on their path (even the police) and at the same time continue their adventure to win the Custom Robo championship.

While some story aspects are clearly aimed at younger people (get home, eat, sleep, eat, school, etc.) There are lots of quirky characters to make up for some of the mundane chatter. Your buddies Liv and Dennis are a funny bunch too. When Dennis gets stressed out over an upcoming tournament he says: “That’s why I’m surfing the net for pictures of kittens to chill me out. Check out this gray one!” Likely referring to cat blog stuffonmycat.com.

A lot of the game’s fun here lies in leveling up your character through battling other Custom Robo owners and playing in Tournaments, so he can eventually control more advanced sci-fi Robos. There’s a list of the 17 ranks that have to be conquered: Novice, Apprentice, Adventurer, Journeyman, Fellow, Master, Soldier, Knight, Lord, Baronet, Baron, Viscount, Earl, Marquess, Duke, Prince, and King.

Robos are arranged in groups that are similar to their abilities:

* Certain robos that have been enhanced for illegal purposes.
** Certain unlockable robos that cannot be bought in stores. Robos like the Chick Robo, which can only be given to you by a kid in your clubhouse once you beat him. But you’ll need to get a record 380 Max Combo by, for example, launching two seeker pods, stun him, dash, and repeat stunning or instead battle an old timer and use the magnum gun and bomb.

Each victory will win you points and money depending on how much HP you have left, how fast you won, and if you did any combos. From the extra cash you’ll be able to buy all the parts you need for your Robos at the parts store.

Don’t worry if progress isn’t as fast as you’d like, because the handicap feature allows you to lower an opponents HP all the way down from 1,000 to 250 if you keep losing. Even after you finished the story mode, which should take you a while and give you your money’s worth, then you’ll still be able to go back and complete all the Mission Battles and play Grudge Matches with the townspeople. There’s more depth left in the game if you take into account the hidden areas you can explore and the illegal parts you can purchase to mix up your battle strategies.

Multiplayer: Although there is an extensive, RPG-style adventure Story Mode, the meat of the game comes from battling other commanders in 1 VS 1. Players can do this via local wireless using Multi-Card Play or if only one player has a game card, using DS Download Play, and there’s online using Nintendo Wi-Fi Connection. Before you start a match you can choose to play against anyone or only playing with or without illegal parts. One of the game’s seemingly useless but fun features is the ability to pose your Robo in a diorama, which can be bought in a diorama shop; it’ll allow you to show off your Robo posing to your opponent in front of a setting before a Wi-Fi battle. Mine’s relaxing in a chair at the beach with a bikini friend, but you can even go prehistoric. Don’t forget to trade the ones you don’t want. Custom Robo Arena also has a Rivals Roster and features online voice chat that allows players to talk to anyone on their Friend Roster.

Hardly the game’s fault is that it’ll sometimes take 5 to 10+ minutes to connect with someone else online, because of too few players on at various times, but it still takes away from starting a quick battle in between chores. Having additional opponents online definitely ups the game’s challenge though, as you face off against people of about same skill level to see who’s best. That should keep you coming back for a while longer.

In conclusion: I came in looking for a portable version with action similar to Sega’s Arcade robot game Virtual On that I played 15 years ago, and while that’s just a straight-up shooter, I found one aspect of it missing in this Nintendo DS game. The developers should’ve taken a note from various other mecha series (like Virtual On) that have one of the most satisfying battle moves: charging up your cannons and unleashing all your rockets at the same time in a massive volley onto your unsuspecting enemy. Luckily you can still get that “just you wait till I’m fully charged” feeling during the storyline, as you’ll learn to combine soul, strength, and skill to master the Soulboost, a temporary power up that boosts all your stats and turns your Robo golden.

I know it’s cliche to favor the main Robo that’s on the box, but my favorite’s still Shining Fighter Ray MK III. You get to fine-tune your Robo until you’ve got the ideal combination of attack, speed and defensive abilities to suit every situation. If you’re into that sort of robots action-RPG type of game youâ€™ll have fun with Custom Robo Arena. Now let’s rate this game on its fun-basis.

FUN FACTOR – 7.5
I did not expect to enjoy the kids story as much as I did, it’s best compared with the Robos themselves. Both are miniatures, yet have their cool moments, because they don’t over-complicate gameplay with a long learning-curve. As you improve your skills the feeling of barely beating the tougher opponents makes you excited, but you know you’ll have to do better next time. That’s worth a lot, as it keeps you coming back for more. My hands didn’t get tired after using the all-button controls for a couple of hours on either the DS or DS Lite. Also, robot warriors are cool!

Graphics – 8.0
Only saw a little bit of clipping between the Robos and walls, it looks just like a 3D N64 game during battles. That’s a nice thing to have on the DS. Still looks great when you change the camera view in battle with Select for a back-view perspective. All the different parts and their action executions fit the Robos and arenas well. Too bad there are only a few cut-scenes.

Audio – 7.0
Action-packed music make the battles that much more tense, a good to listen to overworld theme and all the sci-fi robot (firing) effects you’d expect. Nice, but missing those stand-out songs.

Ingenuity – 8.0
It’s fast-paced, has thousands of combinations and yet you don’t feel overwhelmed, since it’s presented in an easy digestible package that eases you into using all the DS’ buttons as you’ll learn to think on your feet (or in the air) after only a few hours of play. The fighting engine is very polished. Don’t forget to spend some time with the manual, because the controls have depth.

Replay Value – 8.0
A lengthy (but sometimes boring) story mode, lots of Robos to customize, and you can play some more in the local or online 2-player multiplayer mode. I’ll be right back; I’ve got another challenger.