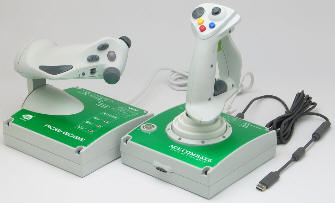 Namco Bandai announced that it will offer a limited edition Ace Combat 6 Ace-Edge Flightstick Bundle this holiday season when the game is released on Xbox 360.

The ACE-EDGE Flightstick is the first and only flightstick for the Xbox 360. Taking advantage of Ace Combat 6: Fires of Liberation’s ultra-realistic and immersive flight combat experience, the unique peripheral offers an analog throttle to control speed and a layout that fully utilizes the game’s excellent pad controls. The ACE-EDGE Flightstick will give gamers the ultimate Ace Combat experience as they live the war zone feeling the intensity of being right there in the cockpit as they face the most action-packed aerial combat to date.

And for those that don’t want to or can’t afford the Flightstick, you can control the action using a standard 360 controller.

The Ace Combat 6 debut trailer:
Click on the bottom-right corner arrow to view it fullscreen.

“Hori’s long history of quality peripherals for Namco Bandai games can assure gamers that the Ace-Edge Flightstick will truly live up to its predecessors and enhance the already incredible and intensely realistic Ace Combat gameplay experience,” Makoto Iwai, Executive Vice President and COO at Namco Bandai said. “We are confident that this bundle set offers gamers the most complete and compelling Ace Combat experience ever.”

The Ace Combat 6 ACE-EDGE Flightstick Bundle will be available in a limited edition quantity at Electronics Boutique, GameStop and Gamecrazy outlets in the U.S. as well as online at Amazon.com this holiday season. Consumers who purchase the premium set will also receive a custom-made Ace Combat 6: Fires of Liberation Xbox 360 faceplate that will not be available anywhere else.

“In the crowded peripheral market, a HORI product is always unique and well-known for its quality,” said Yuuki Mizutani at HORI Co. Ltd. “The ACE-EDGE Flightstick was designed specifically with Ace Combat 6: Fires of Liberation in mind. Our totally unique and technologically advanced flight stick and Namco Bandai’s newest flight-action game, will be a killer combination and a must-buy bundle for Ace Combat fans when it hits stores this holiday season along with the game.”