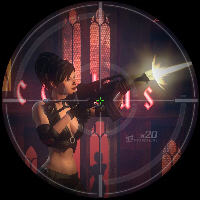 The Agency is a pick-up-and-play massively-multiplayer online (MMO) gaming experience from Sony Online Entertainment (SOE) for the PS3 & PC, where players assume the role of elite agents in a modern-day world. Both solo players and groups will enjoy a wide variety of cooperative and competitive story-driven missions set in exotic locales across the globe.

The Agency is a fast-paced, online persistent shooter in a modern setting of bullets, bomb blasts, and betrayal. Live the life of an elite agent in a world of super spies and rugged mercenaries, who use both the highest technology and the lowest tactics to accomplish their goals. Featuring cooperative and competitive play, The Agency is designed to provide instant action and long-term strategy for all fans of espionage, intrigue, and explosive gameplay. Take a look:Click on the bottom-right corner arrow to view it full-screen.

* Become An Elite Agent: The Agency offers hundreds of unique missions with varied end-goals requiring combat, stealth, and style. With gameplay ranging from sneaky assassinations to all out assaults, from vehicle challenges to casinos loaded with mini-games, thereâ€™s something for every aspiring agent.
* Build Your Own Agency: As players advance through the ranks of their faction, theyâ€™ll also begin building their own Agencies. Players will increase their power even further by creating Joint Agencies with others.
* Mercenary or spy, the choice is yours: In the Agency, collect the right weaponry, gadgets, vehicles, gear, attire and aliases to gain access to various locales and influence over the people within them.
* Put Operatives to work: Operatives are collectible non-player characters who provide the goods playerâ€™s desire, the services to keep them alive, and allow them to concentrate on the mission at hand. Operatives work 24/7, regardless of whether players are logged in, and they can even keep them up-to-date through email and instant messages.
* Fun Now, No Waiting: The Agency is not about waiting for the fun to start. At any point, players can take a break from their high-flying career to engage in a number of other activities. Veterans and new players alike can take on other players at the card tables, the shooting range, or in head-to-head combat.

Is it bad I think it looks like Rare’s Perfect Dark Zero on Xbox 360? I actually enjoyed their online multiplayer modes, so I feel Sony’s MMO-shooter has potential. No release date, but with a beta expected this year, we might not see it until 2008.