In the mid-1980s Sony Researcher Ken Kutaragi wanted to improve Nintendo’s Famicom/NES sound chip, he contacted them and this leads to him designing the Super Famicom/SNES Sony sound chip for Nintendo.

In 1988 this resulted in Nintendo contracting Sony to create a Super Disc drive for the upcoming Super Famicom/SNES in the tradition of the Famicom Disk System (a floppy-disc add-on to the Famicom in Japan). When Nintendo began planning for the Super Famicom’s 32-bit successor, they again got help from Kutaragi who suggested the use of CD-ROMs and so development on the SNES-CD began.

By 1991, they were certain what the console was going to be. It would be a 16-bit (not 32-bit) add-on (not standalone) for the Super Famicom that would sit underneath the system and used CDs. This was to compete with the Sega Mega CD, which had been announced that same year and due for release in December. 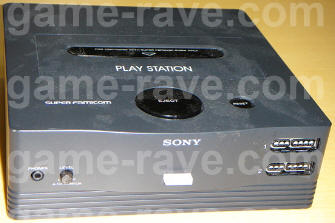 Sony made a few versions of the system (by this time, called the Play Station). One was the SNES-CD just (shown at the top), another was a standalone system that could play its own CD games and SNES games. Sony later developed this into their own PlayStation, but this original version is not the same as the PlayStation we know today. It’s this last prototype version photos were never shown of, until now 16 years later it was finally revealed online as you can see in the photo above this paragraph.

This newsitem will be updated as soon as Gamerave releases new information about the prototype PlayStation-SNES hybrid console. As we know now the release of this hybrid console fell through when Nintendo discovered Sony lawyers wrote the agreement in a way that would leave Nintendo without software fees (which is their bread and butter) and thus Nintendo went to Philips for a SNES CD-ROM (SNES-CDi hybrid), which eventually became just the CD-i. In the meantime through legal actions and the SNES being the 16-bit console wars winner, all three companies came together to make one 32-bit add-on console in October 1992. The agreement was for a new SNES CD-ROM add-on, this time to be made by Nintendo, Sony and Philips and called the SNES Nintendo Disk Drive (AKA Philips CD-ROM XA).

Eventually by May 1993, Nintendo released the last tech specs and information relating to the SNES add-on. A release date for fall 1994 and a tentative price of $200 was set. The CD format could hold 540 megabytes and games like Zelda and Street Fighter 2 sequels were already in development. But the SNES add-on was a no-show at the 1993 Summer Consumer Electronics Show. Before the end of 1993, Nintendo officially announced the SNES add-on plans were cancelled.

Full description of the quite confusing historic events at Consoledatabase and Nsider. Via Digg