Sony says PSP is still waiting for its killer titles 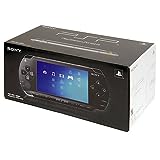 SCEA’s chief financial officer Robert Wiesenthal has said the PSP handheld’s software potential has been lackluster, and is considered to be slowing PSP hardware sales. To quote him: “Clearly on the software side, any real killer title will galvanize the sales… there have been a number of titles that have been terrific, but not the one title that defines the product.”

This mirrors similar thoughts from Hiroshi Kamide, director of the research department at KBC Securities Japan, who believes the PSP hardware is stellar while the compelling reason to own one is not. He said: “Most of the software is knock-offs of PlayStation 2 titles and that won’t do Sony any favors.”

While even PSPfanboy agrees, they do list the following upcoming games as refreshing for the PSP’s games library: The Crush puzzler that just came out, RPG fanatics should be happy this summer with the Final Fantasy I and II remakes, Dungeons & Dragons: Tactics, and Jeanne d’Arc. By the end of the year we’ll also see big games like Syphon Filter: Logan’s Shadow (September 4th), SOCOM Tactical Strike (October), God of War: Chains of Olympus, Silent Hill Origins, and Castlevania: The Dracula X Chronicles.

Almost all of those are new games as well. But I reckon the point the above people are trying to make is that there are only a few great games for every kind of gamer, and there isn’t an overwhelming number of killer titles coming up for all portable gamers to look forward to. That, and the price for the unit itself is still too high for just anyone to pick up.

This is confirmed by PSP sales declining faster than Sony had anticipated. The cause? The overwhelming success of the Nintendo DS Lite. Sony expected to sell 12 million units this financial year that ran from April 2006 to March 2007. These estimates have now been dropped to nine million PSP sales.