Naruto: Path of the Ninja RPG announced for DS 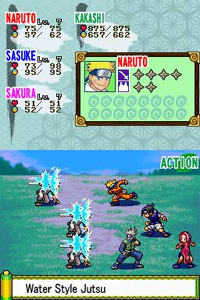 Has your Naruto videogame quota not been filled this year? If not, then I’ve got great news for you! Tomy and D3 today announced the fall 2007 release of Naruto: Path of the Ninja on DS.

It’ll be the first Naruto RPG to be released in America and will offer original content and scenarios that have never been seen before! Based on episodes from VIZâ€™s hit anime series Shonen Jump Naruto the new game will feature a time based combat system in which players must determine each characters strengths and use them accurately to help them defeat the enemy.

You can choose from six available characters, you’ll be able to explore the Village Hidden in the Leaves and the world of Naruto as you roam across forests, fields, rivers and mountains. Along the way players will encounter bosses and enemies that they must use their special techniques to defeat.

â€œWe are really looking forward to bringing NARUTO: Path of the Ninja to North America,â€ said Careen Yapp, vice president of licensing and business development, D3PA. â€œSome of the best elements from all the Japanese NARUTO RPG releases will be utilized to create an exclusive and unique game that no one has ever seen!â€