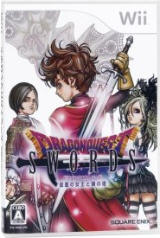 This exclusive title utilizes the Wii’s motion sensing controls as players use the Wii remote to slash, parry and slice their way through a land filled with trademark Dragon Quest foes. Developed with both longtime fans and casual audiences in mind. Square-Enix mention they hope Dragon Quest Swords: The Masked Queen and the Tower of Mirrors will take video gaming to an entirely new level of fun and interaction. Take a look at the new Dragon Quest Swords video:
Combining ingenious gameplay elements from series creator Yuji Horii, character designs from famed artist Akira Toriyama and music from renowned composer Koichi Sugiyama, the “golden trio” of game designers has delivered a timeless franchise that continues to reinvent itself.

For 2007 Square Enix will expand the franchise with the release of “Dragon Quest Monsters: Joker”. Developed exclusively for the Nintendo DS and arriving in North America in Q4 2007, players assume the role of a monster hunter as they capture, train and breed a powerful army from more than 200 classic Dragon Quest creatures in order to become the world’s greatest monster trainer. This sounds super-innovative, I’ve never heard of a similar title that does this, well as long as it’s fun. “Dragon Quest Monsters: Joker” has already achieved sales of more than 1 million units in Japan, “Dragon Quest Swords: Joker” is a breakout title that combines the depth of a classic Dragon Quest RPG with the addictiveness of a monster catching adventure.

As mentioned above, sometime in 2008 Square Enix will then release “Dragon Quest Swords: The Masked Queen and the Tower of Mirrors”, an intuitive action RPG for the Wii.