ActRaiser (SNES, 1 player, 800 Wii Points = $8): A masterpiece of game design originally released in the early days of the Super Nintendo Entertainment System, ActRaiserâ€™s enduring popularity stems from its revolutionary combination of action- and simulation-based game play. The user plays the role of the Master, a dethroned deity whose once-idyllic world has fallen under the control of the Evil One. Stripped of godly power, the Master must somehow put an end to the Evil Oneâ€™s reign and rebuild his desolate realm. Game play alternates between two modes: Action and Simulation. In Action mode, the Master must battle against impossible odds to pacify six lands. Pacifying a land unlocks Simulation mode. In this mode, the Master must oversee the development and repopulation of the territory he has reclaimed. In doing so, he will gain followers who gradually restore his godly might, empowering him to take back the next land and, ultimately, defeat the Evil One.

(Sega Genesis, 1-2 players, 800 Wii Points = $8): The local arcade is packed with kids, all lining up to play the latest, most realistic videogame theyâ€™ve ever seen. Itâ€™s called Wild Side, and it uses holographic images to immerse the player in a strange world. But thereâ€™s a problemâ€¦ Kids are literally getting sucked into the game, and now several of them are trapped.Throughout more than 100 levels, youâ€™ll take on several different forms, such as a Berzerker, a Micromax, a Maniaxe or a Skycutter, which will make you much more powerful. Itâ€™s up to you, Kid Chameleon, the best gamer in town, to get yourself inside the game so that you can defeat the gameâ€™s boss and bring your friends back to reality. 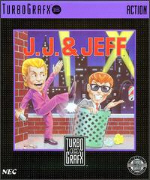 J.J. & Jeff (TurboGrafx16, 1 player, 600 Wii Points = $6): This comical action game features two bungling detectives, J.J. and Jeff, as they travel through a total of six fields. One day, a request comes into their office to take a case that requires them to â€œrescue a wealthy man whoâ€™s been kidnapped.â€ Choose between the two characters and set off alone to outwit your partner and save the day. Each field is broken down into four areas, where enemies, as well as your partner, will try to keep you from your goal. There are many items throughout each area. Kick around in various locations to make them appear.Jump and spray-paint your way toward your goal. If you find a hidden room, you can regain health while being completely entertained by its short sketch and surreal allure. 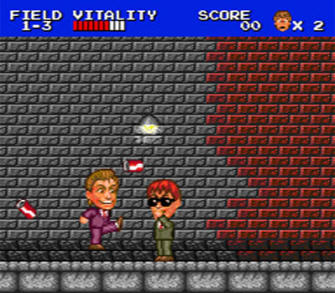 No good video online, a screenshot was all I could find at Defunctgames where they reviewed the J.J. & Jeff game.