Mario Strikers Charged Football on Nintendo Wii is the sequel to the GameCube title Mario Smash Football AKA Super Mario Strikers, the action sports series returns with an all-new roster of features. This time around you use the Wii Remote and Nunchuk Controller to win the ball, score goals with the help of loads of special moves and power-ups, or take control of the goal keeper to perform saves.

Mario Strikers Charged doesn’t just let you win the striker cup in the single-player game or do versus matches via local multiplayer. No, this time around (starting today!) an action packed 4-player online mode will also be supported via the Nintendo WiFi connection service, allowing you to take part in tournaments with people from your continent, either alone or with a friend, against another team, but players always split between two teams.

Now, let’s take a look at how this supercharged soccer game can be fun to both fans of soccer (also called football outside of Europe) and even be a blast to people who do not like soccer at all! Find out how the latest Mario sports game performs when it goes in VGB overtime leading to sudden death. That’s my analogy for having put in the time to train this week thanks to Nintendo sending us an early copy and now being ready to score, um give it a score, I mean.

To see whether the game would be fun for both soccer/football fanatics and gamers who could care less about the sport, I invited my soccer fanatic friend who used to play the sport for real and played the game with him, and since I only watch Cup Finals on TV once a year I’m fit for the role of the non-interested one. With that difference explained, the test started with us going through the game’s tutorial Strikers ABC to get a grip on the captain’s Mega Strike plus Super Ability and sidekick’s Skillshot and playing a few matches in Versus mode after. The result was that the arcade-y controls made the game easy enough to pick up and play that we ended up having fun gaming for hours with a little competitive coarse language, but most of all taunting laughs.

I’ll tell you this; Zidane got it all wrong in the 2006 Soccer World Cup Final head butting his way through the match, Mushroom Kingdom power-ups *are* the way to go.

In Mario Strikers Charged everyone’s favorite plumber Mario dons a soccer shirt and is joined by other famous Nintendo characters who take on the role of captain, some of whom you have to finish the Road to the Striker Cup for to unlock. Players then select a team of friendly and unfriendly faces as sidekicks to make up the rest of the team.

You form an original team by combining 1 of 12 captains with 3 of 8 sidekicks before competing in one of the game modes. 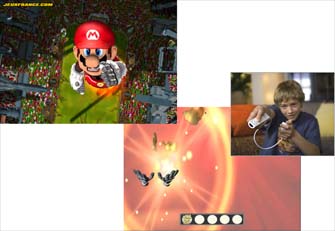 You use special abilities to completely mix up the odds in any given game, powerup items like various shells that can be thrown do this when they are triggered after charging up. Which is done in the same way a player charges energy to the metal ball, making it more likely to find its target when fired at a goal. But the main make-or-break part of the match is that every captain has their own set of skills, these so-called Super Abilities for example (when the ball is charged) allow Mario to become a giant and walk all over the other team. For sidekicks there are similar moves called Skillshots that for example allow Boo to pass right through a goalie and score. Then there are special captain shots called Mega Strikes, where the iron ball splits up in 3 up to 6 balls that fly at the goal. The defending player must use the Wii Remote to target and aim at to stop these balls mid-air before they hit the goal. I won’t lie, it gets intense!

Aside from stopping Mega Strike goals with the Wii Remote in that sort of mini-game, it’s interesting to note that the motion controls are sparsely used in-game, possibly to prevent fatigue. It’s good they didn’t tack on any Wii Remote motions, so you can either press the plus-pad or shake the Wii Remote to make a tackle or hit. A good tip is to shake your Wii Remote like crazy when an opponent’s Mega Strike is charged up and their meter appears on-screen, this will make it harder for them to make a good fast shot.

See how the gameplay is controlled in this demo:
Obviously before each match you choose your players, but after that you can select one of the 17 available stadiums (10 new for those who played the previous game), with each having various terrain obstacles, there’s nothing quite like seeing your player fly off the windy Thunder Island playfield after being hit by a fish, tractor or cow! Try adjusting your play strategy by selecting a team that can take advantage of certain stadiums, like a fast team to outsmart those annoying Thwomps that try and crush you. The new stadiums are The Vice, Thunder Island, The Sand Tomb, The Classroom, The Lava Pit, The Wastelands, Crystal Canyon, The Dump, Stormship Stadium, Galactic Stadium and they are joined by old remakes of The Palace, Pipeline Central, The Underground, Konga Coliseum, Crater Field, The Battle Dome, and Bowser Stadium.

The graphics are nice, especially at a 480i/p display resolution. With good special power up effects and scenes in between gameplay. The graphics could’ve been done on GameCube, so what saves the game is the great hand drawn art that also converts well to the clearly polished character models. Cut-scenes have their own charm when a character like Toad does his victory celebration break-dance, but what the heck is Waluigi doing so near his crotch?!

Audio was surprising, there are lots of funky remixes of traditional Mario music, as well as catchy new tunes, trust me on that theyll get stuck in your head. The added immersiveness comes in each match with the moves you make by letting the Wii Remote pump out not just rumble, but the audio speaker reinforces your actions as well. The voices have nice touches everywhere, like when the crowd begins to cheer your captain on after a goal.

Single-player game modes described:
* Strikers ABC is your 10 stage tutorial.
* Road to the Striker Cup is the main single-player match competition mode.
* Striker Challenges taunt you to complete various challenges from Mario Strikers League history.
* Then there’s a Hall of Fame, so you can admire your trophy winnings.

Multiplayer game modes described:
* Domination mode allows you to choose your player, team and stadium to start a match against a friend.
* Nintendo Wi-Fi Connection mode takes you online for the first time on Wii! (outside of Japan). Once you’re connected to your Nintendo Wi-Fi Connection (I use my DS USB Connector) you get to choose a Mii to represent you online, so in case you become the best player of the day you’ll be shown to everyone at the online startup screen, next to how long the current season will last and the leaderboards. Choose either a Friendly or Ranked match to play online, in Mario Strikers Charged you’ve got your own game number to exchange with (internet) friends, similar to how the DS does it, right down to matching you with random players of the same skill level. While in unranked matches you can play 1 VS 3, you’ll most likely be playing ranked 1 VS 1 or 2 VS 2 matches if you have a friend around.

As a conclusion, especially that last sentence in the above game mode sum up is important, because its just more fun with someone around as online play doesn’t give any interaction via voice-chat. Despite all the arcade-like fun the special moves and power-ups bring, there’s also a downside, the challenge mode will only keep you busy for so long and the main singleplayer cup competition has you choose between an either easy-peasy or way-hard difficulty setting, there’s no in-between medium setting, so you either win or lose a lot in easy or hard mode, respectively.

Its saving grace, the easy to jump in online multiplayer (that I tried before even winning the first cup) managed to be fun against other gamers and it gets better the better you get. Disappointing it was finding out that while Nintendo promised worldwide online play, it’s bound to the continent you live in, so no playing against far-away internet friends. Friends you might already have in your Wii Contact List will have to be added again in the game’s own Friends List, everyone hated this in DS games, yet Nintendo didn’t change it for Wii. So yes, there are a few minuses overall, but considering you know the limitations of Nintendo’s online service, the option is awesome to have half a year after the Wii’s launch. In the end a wacky arcade sports game like Mario Strikers Charged Football can stand on its own, but it’s always a lot more fun to play against or with a friend. As long as you keep that in mind, youâ€™ll be in for a good time. That’s why VGB scores games on their fun factor.

FUN FACTOR – 8.0
If I had to compare it to another Mario game series, this soccer sequel is the Double Dash of the Mario Kart series; not everyone’s going to like it, but those that do discover there’s a lot more depth to it the more you play.

Graphics – 7.0
Fitting character art. Levels look polished. Cut-scenes are fun to look at, but won’t blow you away.

Audio – 7.5
The catchy tunes linger on long after the match is over. Funky remixes of Mario songs, as well as new tunes are great. The voices and sound effects really add to the experience.

Ingenuity – 8.0
Adding Mario & Co with easy to learn arcade controls and lots of power-ups to the soccer field, makes the gameplay fun for both fans and non-fans of soccer. Kudos to developer Next Level Games for improving their series without adding needless flailing of our arms.

Replay Value – 8.5
Once you’re done with the single-player modes and collecting all Cups, you’ll likely leave it behind, but multiplayer is a good laugh with a friend. Take your Wii online and play alone or co-op with a friend against others hooked on the game. It’s not only a fun time away from the CPU players, you’ll have thousands of fellow gamers to play against and discover new tactics from.