R-Type Tactics strategy spin-off on PSP. Irem confirms R-Type Final on PS2 was the last shooter in the series

The latest issue of Japanese magazine Famitsu has revealed R-Type Tactics for the PSP. Instead of another classic shooter, Irem is making a strategy spin-off to the series. When the game’s producer Kazuma Kujo was asked why they made this game into a strategy game, he answered: “The R-Type series came to an end with R-Type Final, so with the new game, Irem wants you to think ‘this is new.'” The game will be released later in 2007 in Japan. 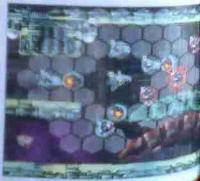 As you can see from the picture to your right, R-Type Tactics looks like a traditional shooting game (more R-Type Tactics screenshots), right down to the side-scrolling perspective and walls blocking your path. The difference is that instead of freely moving about and blasting enemy ships, you take turns with the enemy, making careful movements over a grid. Perform an attack, and the game switches to an effect-filled attack sequence.

IGN translated that the new game includes weapons as well as boss characters similar to those in the shooter series. The “force” sub-weapons play a big part as well, adding extra power to your ship.

Modes of play include a single player mission mode and an ad-hoc-based battle mode for multiplayer. It’s not sure at the moment if there’ll be a story mode wrapping an absurd storyline around the game, but fans will at least get an image gallery on the UMD disc. — Pictures via Neogaf