Ecco the Dolphin: Defender of the Future on Sega Dreamcast classic, not classy, video review 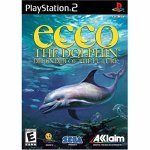 Originally recorded in September 2000, when Ecco the Dolphin: Defender of the Future was released, the Classic Game Room takes a look at the Sega Dreamcast game. Defender of the Future was the 4th title in the Ecco the Dolphin series. First released for the Dreamcast and later for the PS2, the underwater aventure was unconnected to the previous titles in the series and was developed by Appaloosa Interactive.

Apparently Classic Game Room was the 1st classic video game review show on the Internet. It ran from 1999 to 2000, but was cancelled in the dot-com bust. See how these gents did a comedic review back then, you’ll find no Isle of Tranquility here: