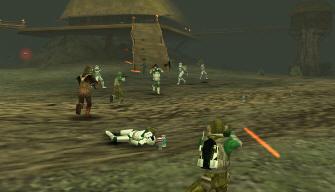 LucasArts today announced the FPS game Star Wars Battlefront: Renegade Squadron as an exclusive release for the Sony PSP, coming in Fall 2007. Renegade Squadron will support online multiplayer matches, up to 16 players via internet and up to 8 players via ad-hoc wireless connection, or in co-op or against other teams.

Star Wars Battlefront: Renegade Squadron is the previously untold story of a ragtag ensemble of battle-hardened rogues and scoundrels assembled by Han Solo. Gathered to execute some of the most secretive operations in the Rebel Alliance’s war against the Galactic Empire, the Renegade Squadron participates in battles spanning the galaxy. From the Valley of the Sith on Korriban to a dogfight in space through the remains of Alderaan, Solo directs the team on missions of sabotage, rescue and retrieval.

The loads and loads of features include:

* Beginning with the evacuation of Yavin 4 (end of A New Hope) and ending with the Battle of Endor (Return of the Jedi), the original story features 11 battles as seen through the eyes of a clandestine Rebel team personally selected by Han Solo.
* Millions of possible customizations directly affect gameplay to an even greater degree than the predetermined character classes of previous Star Wars Battlefront games.
* Earn credits to upgrade and customize soldiers’ attributes (health, speed, agility), equipment (weapons, items) and appearance (species, body, insignia, uniform colors).
* New maps include Ord Mantell, Boz Pity, Korriban, Sullust and Saleucami, plus new space battles at Kessel, Hoth, Bespin, and the remnants of Alderaan. Renegade Squadron also adds a second Hoth map, plus a new interpretation of Endor.
* For the first time, fly as heroes in space aboard the Millennium Falcon, Darth Vader’s TIE Advanced, Jango and Boba Fett’s Slave I, and Obi-Wan Kenobi’s Jedi starfighter.
* New land-based heroes include Admiral Ackbar, Ben Kenobi (Episode IV), IG-88, Asajj Ventress and Kit Fisto. Fourteen heroes return from Star Wars Battlefront II.
* Renegade Squadron debuts B-wings and TIE defenders in space, plus A5-R Juggernauts, T4-B heavy tanks and mountable carrion spats on land.
* Enhanced space combat features a refined control scheme. For the first time on PSP, players can also enter capital ships as they did in the console versions of Star Wars Battlefront II.
* Expanded multiplayer allows for up to 16 players via Infrastructure and eight via Ad Hoc. (Star Wars Battlefront II for PSP featured four-player Ad Hoc only.)
* Also returning are Star Wars Battlefront staples Conquest and Capture the Flag (one- and two-flag varieties, plus new Hero Capture the Flag where the flag bearer plays as a hero).
* Infrastructure mode embraces community through leaderboards and profile pages, where players can display medals they’ve earned, their battle statistics and more. 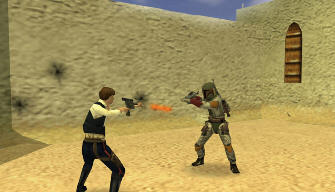 The only original Star Wars Battlefront experience of 2007, Renegade Squadron delivers a new way for players to experience their favorite Star Wars battles any way — and anywhere — they want. The game presents new battles and missions found through a never-before-told story, as well as an unprecedented wealth of personalization and customization options. And for the first time on the PSP system, Star Wars Battlefront players can team up or compete online with friends all over the world.