Star Ocean 1 & 2 remakes for PSP and Star Ocean 4 (for PS3?) announced by Square-Enix 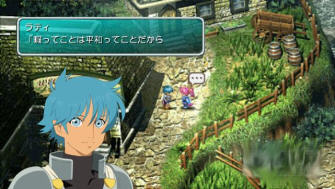 Producer Yoshinori Yamagishi was also present at yesterday’s Square-Enix Party 2007 pre-conference meeting. He said a few words, and then let a video do the talking. It revealed these games:

* Star Ocean: First Departure is a full remake of the first Super Famicom (SNES) Star Ocean Japan-only game from 1996, but for PSP.
* Star Ocean: Second Evolution is a full remake of Star Ocean: The Second Story that originally appeared on PS1 in 1998, and is also for PSP.
* “Star Ocean 4 is currently under development to meet the highest specifications, and is being developed by tri-Ace,” said Yamagishi. He didn’t mention the platform or the release date, but 1UP surmised that Star Ocean 4 will be released on PS3, also because 2004’s Star Ocean 3: Till the End of Time was a PS2-only game, but a multiplatform release is not out of the question.