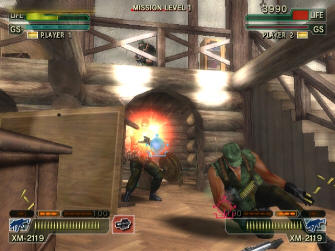 SEGA of America today announced Ghost Squad for the Wii. Developed by SEGA’s AM2 arcade division, Ghost Squad became a smash hit upon release and was the top-earning arcade lightgun game in 2005 for SEGA’s arcade division. The Wii version brings the arcade experience home and adds a number of new Wii-specific gameplay modes and features. The game features the use of the Wii Remote as a multi-purpose tool that allows players to easily control the targeting of on-screen enemies, defuse bombs, and rescue hostages. The battle to eradicate global threats in Ghost Squad begins Holiday 2007.

With a squad of three others, players will traverse three different mission areas each comprised of multiple levels, unlocking 25 high-powered weapons as they progress. Within each level there are a series of selectable alternate routes that will provide the gamer with increasing challenges as enemies attack from unexpected places. Weapon selection is varied across a wide array of weapon types ranging from machine guns, submachine guns, pistols, sniper rifles, shotguns, and even crossbows. Ghost Squad will feature an Arcade mode, a Multiplayer mode for up to four players, and more!

“Ghost Squad brings the classic light gun blaster experience that SEGA made popular in the arcades to the Wii,” said Scott A. Steinberg, Vice President of Marketing, SEGA of America, Inc. “With a more robust multiplayer experience than even the arcade version and numerous unlockable items and stages adding replay value, Ghost Squad will be the ultimate shooter experience for the Nintendo Wii console.”

The world in Ghost Squad is overrun with terrorism, affecting all corners of the globe. In an effort to combat the malicious plans of the terrorist groups, the U.N. created the Global Humanitarian-Operation and Special Tactics Squad aka “Ghost Squad”. This team of elite soldiers is comprised of the “best of the best” from both domestic and foreign military and special operations forces. Ghost Squad missions involve entering a situation with stealth, executing extreme prejudice upon terrorist subjects, and leaving a target area with no trace of their prior presence.