2 Days To Vegas screenshots and new info for the Xbox 360, PS3 & PC shooter 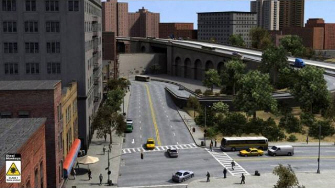 The story centers on the main character, Vinny, who has to travel from New York to Vegas in two days. The open ended game is promised to be more immersing than GTA. It’s inspired by movies’ impact on people. Think of how you feel when leaving the movie theater after a good action flick. This is done by the gangster title featuring car chases, shootouts and unexpected twists to keep you on the edge of your seat throughout the game.

The road trip will take players to a virtual trip across America with detailed locations like the Brooklyn Bridge and the cities. The game takes place during a 48 hour period.

An in-house game engine was used and features global lighting and HDR lighting. They also included a “garbage generator” to simulate the clutter on the city streets. Talk about attention to detail. Edwin Loo of Steel Monkey comments on the Blu-Ray as a distribution media in the PS3 version with: “Blu-Ray solves a lot of our problems.”

Take a look at all the new screenshots at QJ. Or watch this: