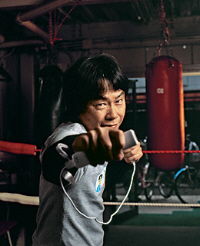 It turns out the Times online readers poll voting for who should’ve been in the Times magazine Top 100 Most Influential People In The World wasn’t needed at all. Famed game designer Shigeru Miyamoto was number 92 in the real 2006 list.

Here’s a quote talking about how Shigeru Miyamoto, Nintendo’s visionary designer, shook up the gaming world from the 80s till now:

“By making video gaming accessible and fun for people like my grandma, Shigeru Miyamoto, 54, head of the Wii design team, has opened the world I live in every day to people who never even wanted to visit it before. He showed us that video games are for everyone, something social and active that brings people together.”

Too bad pro gamer Fatal1ty (who wrote the article for Time) talks more about his own ambitions than what Mr. Miyamoto accomplished when he created Donkey Kong, Super Mario Bros. and The Legend of Zelda over 20 years ago. Still, it’s nice to see how many people are inspired by Shiggy’s work.